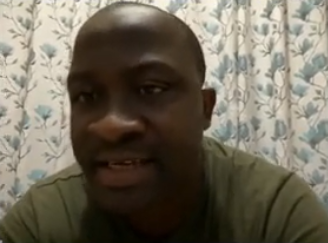 Former Editor of Kotoko Express, Jeremome Otchere says the current Techincal Director of the Black Stars cannot be considered for the position of head coach.

Speaking on JoyNews‘ PM Express, he stated that having Bernhard Lippert as the new head coach to replace Charles Akonnor would not aid the progress of the national team just as the previous administration failed to.

His comments was in response to the Ghana Football Association’s (GFA) search for a head coach after CK Akonnor was sacked from post.

The GFA today, September 13, terminated the appointment of Mr Charles Akonnor and his two assiants.

Reports reaching JoyNews revealed that Akonnor was stripped off his position due to his performance as head coach especially in the last four games of the national team in Group G World Cup qualifying matches against Ethiopia and South Africa.

According to Mr Otchere, the country should not expect anything short of growth from the Black Stars if it fails to adopt the mechanisms set up by countries that are making names for their natiomal teams.

“We need to be serious as a country. From everything the three of us have been saying, it paints the picture of a country that believes that we can do just anything and still get the kind of results that others who are serious are getting.

“Check the countries that have been in the last two or three World Cups and you’d know the caliber of coaches they have. They are not coaches who are owed 8 to 10 months salary and they are still on the job. They are not that kind of coaches. We seem to think that at that level, it is about hope and prayer.

“Everything we are doing doesn’t show that we are serious,” he added.

He advised that the GFA go for a coach whose calibre fits the expectation of the people. Mr Jeorme Okyere noted that such a coach could earn a minimum of $80,000 per month.

Mr Otchere remained certain that if the new head coach to be appointed is not given the right space to work, the current non-performance of the national team will remain same.

“If the coach comes in and he will not be given the freedom to work, we are going to come back to this position again because we still want to do things the way we like it and not like as others do it professionally,” he said.

DISCLAIMER: The Views, Comments, Opinions, Contributions and Statements made by Readers and Contributors on this platform do not necessarily represent the views or policy of Multimedia Group Limited.
Tags:
Bernhard Lippert
Black Stars
Ghana Football Association
Jerome Otchere