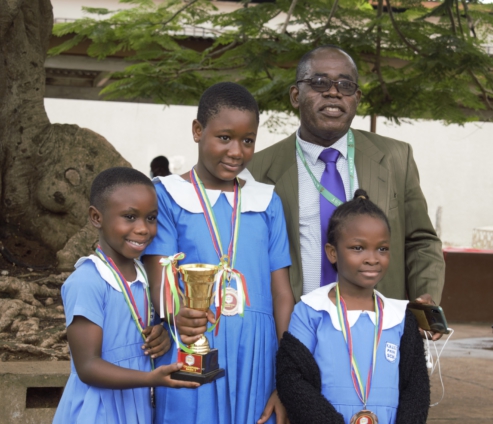 The 5th Edition of the Kwame Nkrumah University of Science and Technology (KNUST) Primary’s annual inter-class quiz competition ended with a dazzling performance from contestants.

With a mark of 95 points class 1C represented by Ama Amponsah, Etornam Samuel and Jochebed Weyeamoh beat 1D,1A, 1E and 1B in a fierce battle to emerge as winners for class one.

Basic 2B not letting their guards down beat opponents 2D, 2A, 2E with 71 points.

In a close competition Eyram Maxine Ayetor, Ohemaa Yaa Amankwah Kodua, Angel Owusu Yeboah Ama Agyaa of class 3E won the competition after facing off with 3B, 3A, and 3C with 88 points

Basic 4H won the next competition as their representatives, Emmanuel Kwame Boateng Akowuah,Nasuren Massawudu and Felix Baffour Addo emerge as winners with 89 points.

Phyllis Nhyiraba Afedzi, Nhyira Quartey, Prince Oppong of basic 6C ended the competition with a sterling performance with a mark of 92 points.

According to Quiz Master, William Osei Tutu, the competition has helped teachers to identify the strength and weaknesses of the contestants.

“Some of the contestant heeded our advice and they have done excellently well.

“We have also seen their short falls in current affairs. We will work on their weaknesses and also build on their strength,” he said.

“With the help of sponsors the next annual inter-class competition would be bigger and better,” he noted.