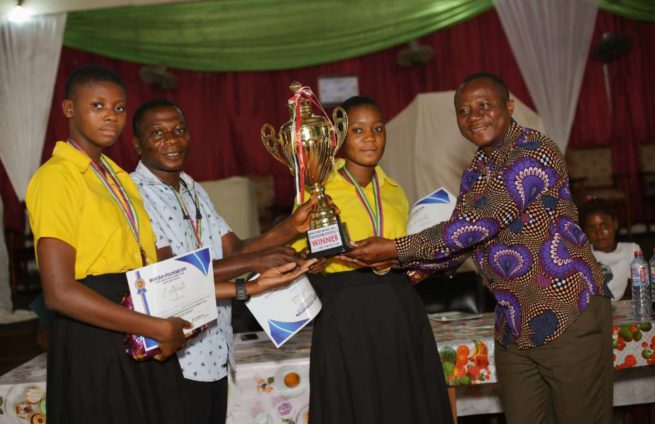 The Mintah Foundation, a Foundation committed to providing quality education and improving the social well-being of the people in the North Dayi District of the Volta Region, has organized its maiden district-quiz competition for Junior High School students in the district.

The two-part competition saw all public Junior High Schools in the six circuits in the district lock horn with each other whilst the private junior high schools also competed against each other in the preliminary contests.

After a successful preliminary contest, six public schools and a private school advanced to the grand finale to battle each other for the coveted title.

All student participants at the preliminary stages were rewarded with book and cash prizes.

For reaching the maiden grand finale, all the participating schools at the grand finale were awarded various sums of money, book prizes and certificates whilst the eventual winners, Cornerstone Preparatory School, and the first and second runners-up schools received special cash and book prizes, medals, certificates and trophies in recognition of
their feat.

Speaking to the press, the Coordinator of the Quiz Competition, Mr. Anthony Dzontoh, a seasoned teacher and entrepreneur, explained that the purpose of the competition is to motivate the student- participants and their mates to strive for excellence in education especially in their preparation towards the BECE.

He was hopeful that the competition which came weeks ahead of this year’s BECE, will be a morale booster to all the
participating schools, and culminate into improved BECE results in the district this year.

He was worried that the North Dayi District which was noted for producing high calibre human resources in the past appears challenged in its delivery of education in recent times.

Mr. Dzontoh was full of gratitude to all the participating schools and their teachers for the enthusiasm they displayed towards this year’s competition. He lauded the significant role and support of the District Education Directorate in ensuring the success of the event.

The Foundation which is also into health care provision has Mr. Mintah Manasseh, an indigene of the area but now domiciled in the USA as its president and bankroller.

DISCLAIMER: The Views, Comments, Opinions, Contributions and Statements made by Readers and Contributors on this platform do not necessarily represent the views or policy of Multimedia Group Limited.
Tags:
Minta Foundation
North Dayi
Quiz