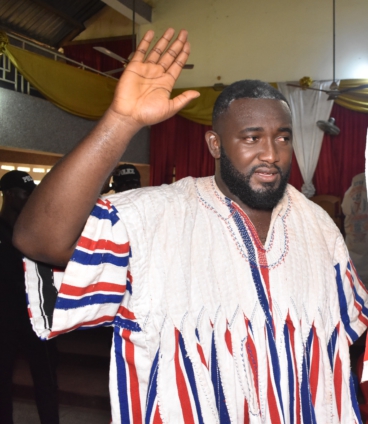 Desmond Tombuor has made history by being arguably the youngest to head a political at the constituency level in Ghana.

The 30-year-old polled 210 out of 386 votes to become the New Patriotic Party (NPP) Chairman for the North Dayi Constituency in the Volta Region.

It was a fiercely contested election, with many tipping his contender, Wisdom Adzangbe, to win the position due to his age, experience and blessing of some old folks of the NPP.

The delegates, mostly youth, however, made an emphatic statement of their desire to be led by a youth who would champion their quests by overwhelmingly endorsing the candidature of the former North Dayi Youth Organiser, Mr Tombuor.

Mr Adzangbe polled 174 votes at the end of the contest organised at the Evangelical Presbyterian Church auditorium in Anfoega.

In a triumphant address, Mr Tombuor promised to work with the rank and file of the party to consolidate the gains made in the 2020 general elections.

He implored all candidates to bury their indifferences and unite to form a synergy to face the bigger enemy, the National Democratic Congress, in 2024.

He underscored the arduous task of breaking the eight-year jinx but believes the NPP has what it takes to achieve such a task with the right set of leaders and mindset.

He emphasised his objective of swaying the majority of youth in the North Dayi Constituency to join the NPP, to enhance the electoral fortunes of the elephant fraternity.

He believes his victory would motivate the youth across the globe to set high aspirations and aim at achieving them, irrespective of their age.

The North Dayi NPP Secretary-elect, Emmanuel Baku, said the current crop of leaders aims at winning the parliamentary seat for the NPP and increasing the presidential voting pattern to retain the NPP.

“Let’s all come on board to fight the common enemy [NDC] to retain power”, he said.