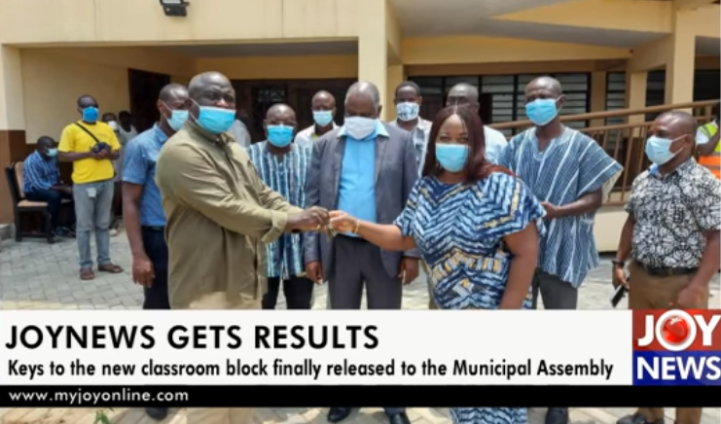 Contractor of the newly constructed and furnished school block at Osu has handed over keys to the Korle Klottey Municipal Assembly.

Students of Osu Presby Cluster of Schools, over the years coped with congestion in their classrooms whiles a fully furnished classroom block, built by the Assembly was situated across the street, was left idle for four years.

The building was barricaded and locked up by the contractor whom reports had it that she had not been fully paid.

After Joy News reported on the bad learning conditions of students at the old school block, the Municipal Chief Executive of the Korle Klottey Municipal Assembly promised the keys of the new block will be handed over to the assembly in a week.

“Once we reconcile things, it will come to the same level at the end of the day and if everything goes well I won’t be surprised that next week we may have the keys to the place and we can start cleaning up for the children to occupy it.”

Following up on the issue with the Korley Klottey Municipal Chief Executive (MCE), Nii Adjei Tawiah, he said preparations are being made to usher students into the new block.

“With God on our side, we’ve been able to deal with all the issues. So all the other arrangements we need is to make sure we get furniture for the place.

“And also this building was completed I think in 2018 and it has over grown weeds all over the place and all that has to be sorted. We went there and there were cobwebs which has to be cleaned, mopping, various things has to happen. We are hitting the ground, running, getting the place ready,” he added.