Coronavirus: Boris Johnson stable and 'in good spirits' and in hospital - MyJoyOnline.com

Coronavirus: Boris Johnson stable and ‘in good spirits’ and in hospital 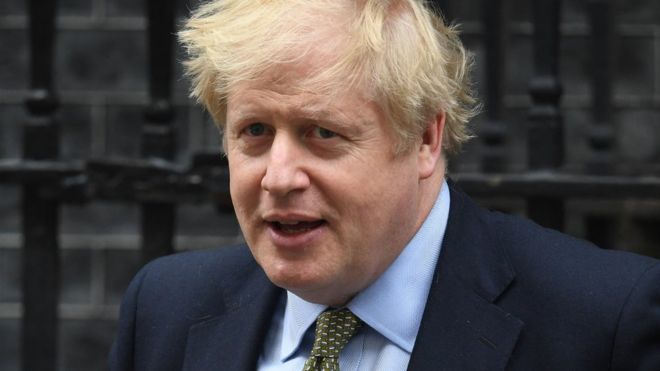 Prime Minister Boris Johnson is “in good spirits” after spending the night in intensive care being treated for coronavirus, No 10 has said.

A spokesman said Mr Johnson, 55, was stable overnight, is being given oxygen and is not on a ventilator.

It comes as Cabinet Office minister Michael Gove became the latest politician to self-isolate after a family member showed symptoms.

Mr Gove said he did not have symptoms and was continuing to working at home.

Mr Johnson was admitted to St Thomas’ Hospital in central London with “persistent symptoms” of Covid-19 on Sunday and was moved to intensive care on Monday at 19:00 BST after his symptoms worsened.

The Queen has sent a message to Mr Johnson’s family and his pregnant partner, Carrie Symonds, saying they were in her thoughts and that she wished the prime minister a full and speedy recovery, Buckingham Palace said.

In a statement on Tuesday, a Downing Street spokesman said: “The prime minister has been stable overnight and remains in good spirits. He is receiving standard oxygen treatment and is breathing without any other assistance.

“He has not required mechanical ventilation or non-invasive respiratory support.”

A ventilator takes over the body’s breathing process when disease has caused the lungs to fail.

Mr Johnson does not have pneumonia, Downing Street added.

Dr Jon Bennett, president of the British Thoracic Society, said it was “heartening” the PM was receiving “standard oxygen treatment” – through his nose or via a face mask – because in more serious cases it would be delivered through mechanical support, such as continuous positive airway pressure, high flow nasal oxygen or more invasive ventilators.

The spokesman said that the mood in government is “determined”, and ministers have a very clear plan set out by Mr Johnson for responding to the pandemic.

The prime minister’s weekly audience with the Queen will not go ahead, although she will be kept regularly informed about his condition, the spokesman added.

Speaking to BBC Radio 4’s Today programme, Mr Gove pledged that if there is any change in his condition “No 10 will ensure the country is updated”.

Foreign Secretary Dominic Raab is deputising for the PM and chaired the government’s daily coronavirus meeting on Tuesday.

As first secretary of state, Mr Raab is the minister designated to stand in for Mr Johnson if he is unwell and unable to work.

Mr Raab said earlier there was an “incredibly strong team spirit” behind the prime minister and that he and his colleagues were making sure they implemented plans that Mr Johnson had instructed them to deliver “as soon as possible”.

Some politicians have called for greater clarity on what Mr Raab’s role as deputy entails, including Tory MP Tobias Ellwood, who asked for details “as to where responsibility for UK national security decisions now lies”.

Lord Heseltine, who served as deputy prime minister under John Major, said it will be a “very difficult personal position” for Mr Raab, who “will be tested by the loneliness of the job”.

“He will be surrounded by lots of people who know what Boris Johnson said, believe Boris will be quickly back and have their own personal agendas anyway,” he said.

Former cabinet member and Tory peer Baroness Morgan told BBC Radio 5 Live’s Emma Barnett Show that while Mr Raab was “incredibly capable”, there was “no way that he would have wanted to be in this situation”.

She added: “I think the reason that people have been so stunned and taken aback and feel so involved with the prime minister’s health, is because Boris Johnson is prime minister, he gets a lot of coverage.

“Obviously, he was very front and centre in an election campaign, which seems like a million years ago but was only a couple of months ago, and people invest an awful lot of hope in their leaders at this time of national crisis.”

Mr Johnson’s condition means his fiancee, Carrie Symonds, who is pregnant with their first child, is unable to visit him in hospital.

She said at the weekend that she is “on the mend” after herself being forced to self-isolate after displaying symptoms of the disease.

Newly-elected Labour leader Sir Keir Starmer described it as “terribly sad news”, adding: “All the country’s thoughts are with the prime minister and his family during this incredibly difficult time.”

Russia’s Vladimir Putin wished Mr Johnson a speedy recovery, saying he was “convinced that your energy, optimism and sense of humour will help you overcome the disease”.

And US President Donald Trump said Americans “are all praying for his recovery”, describing Mr Johnson as “a very good friend of mine and a friend to our nation” who is “strong” and “doesn’t give up”.

It comes as the number of coronavirus hospital deaths in the UK reached 5,373 – an increase of 439 in a day.

The Department of Health and Social Care said there were now 51,608 confirmed coronavirus cases.