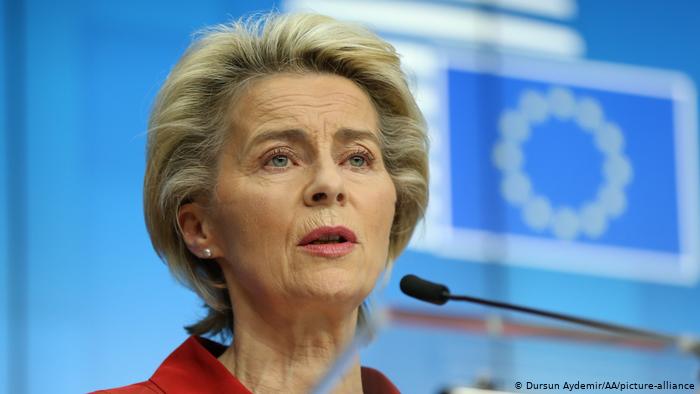 The European Commission president has called on Member States to work together avoid overwhelming hospitals. Leaders have called for internal EU borders to remain open.

The COVID-19 pandemic threatens to overwhelm healthcare systems in the European Union if it does not act urgently, European Commission President Ursula von der Leyen said on Thursday.

Von der Leyen was speaking after EU leaders met via a video conference to find common ground on COVID-19 testing and vaccination strategies, as well as increased coordination in fighting the surging numbers of infections across the continent.

Von der Leyen said that the EU has made €220 million ($260 million) available to quickly move COVID-19 patients across borders for treatment in other Member States.

The Commission said it was intensifying its efforts to procure potential vaccines. The EU is now in talks with four companies to obtain vaccines, and has already inked supply deals with three others, including AstraZeneca, Sanofi and Johnson & Johnson.

More than 1.3 million coronavirus cases were confirmed in Europe last week alone, according to the World Health Organization (WHO), and hospitals are becoming stretched in many EU countries.

As Germany, France, Italy and Spain head into lockdowns of varying degrees, the 27 leaders within the bloc felt it necessary to hold urgent talks.

Von der Leyen said “I understand how tired and worried everyone is, but now is the time for patience, determination and discipline for all of us.”

Calls for better coordination within the EU have become louder and leaders want to avoid divisions which dogged the bloc when the pandemic first emerged, with member states vying with each other to acquire scarce medical equipment.

A robust testing and tracing strategy has been a priority since the crisis began but thus far “at the European level, this plan of action has not achieved the desired results”, President of the European Council Charles Michel, said prior to the video conference.

European Commission head Ursula von der Leyen agreed that there needed to be “massive testing” and said after the conference that Europe’s healthcare system was at risk of being overwhelmed “if we do not act urgently.”

Von der Leyen, an academic epidemiologist before getting involved in politics, called for European nations to pool coronavirus data as “the good use of the money requires good information in exchange.”

She also warned that European nations acted too quickly to remove lockdown measures after the initial wave of infections earlier this year.

German Chancellor Angela Merkel called on fellow bloc members to keep borders open, saying via her spokesman: “a coordinated European approach is of great importance in combating the pandemic.”

There must be “a functioning economic cycle” and the EU must coordinate its efforts to combat the pandemic, she said.

“I think we have all learnt the lessons,” von der Leyen said. “It took very little time to understand that this is hampering the single market, the flow of goods.”

“It did not stop the spread of the virus.”

However, she said EU citizens should restrict travel to essential trips for the time being.

Michel said that rapid testing was the key to keeping borders open, and called for the rapid mutual recognition of rapid tests now coming onto the market.

DISCLAIMER: The Views, Comments, Opinions, Contributions and Statements made by Readers and Contributors on this platform do not necessarily represent the views or policy of Multimedia Group Limited.
Tags:
Coronavirus
European Union
Ursula von der Leyen