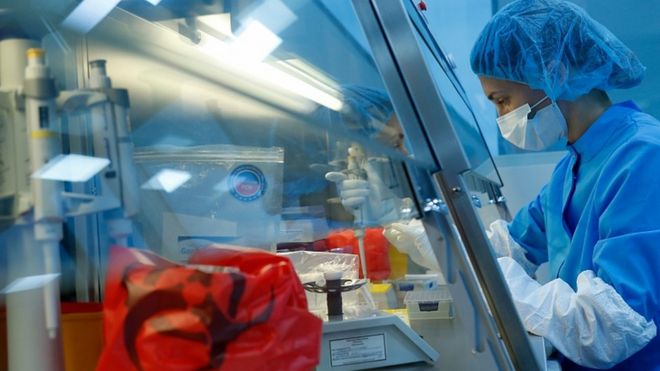 Russian health authorities are preparing to start a mass vaccination campaign against coronavirus in October, the health minister has said.

Russian media quoted Mikhail Murashko as saying that doctors and teachers would be the first to receive the vaccine.

However, some experts are concerned at Russia’s fast-track approach.

On Friday, the leading infectious disease expert in the US, Dr Anthony Fauci, said he hoped that Russia – and China – were “actually testing the vaccine” before administering them to anyone.

Dr Fauci has said that the US should have a “safe and effective” vaccine by the end of this year.

“I do not believe that there will be vaccines so far ahead of us that we will have to depend on other countries to get us vaccines,” he told US lawmakers.

Scores of possible coronavirus vaccines are being developed around the world and more than 20 are currently in clinical trials.

Mr Murashko, quoted by Interfax news agency, said that the Gamaleya Institute, a research facility in Moscow, had finished clinical trials of a vaccine and that paperwork was being prepared to register it.

“We plan wider vaccinations for October,” he said, adding that teachers and doctors would be the first to receive it.

Last month, Russian scientists said that early-stage trials of an adenovirus-based vaccine developed by the Gamaleya Institute had been completed and that the results were a success.

Last month the UK, US and Canada security services said a Russian hacking group had targeted various organisations involved in Covid-19 vaccine development, with the likely intention of stealing information.

The UK’s National Cyber Security Centre (NCSC) said it was more than 95% certain that the group called APT29 – also known as The Dukes or Cozy Bear – was part of Russian intelligence services.

Russia’s ambassador to the UK, Andrei Kelin, rejected the accusation, telling the BBC that there was “no sense in it”.

In the UK, trials of a vaccine developed by Oxford University have shown that it can trigger an immune response and a deal has been signed with AstraZeneca to supply 100 million doses in Britain alone.

DISCLAIMER: The Views, Comments, Opinions, Contributions and Statements made by Readers and Contributors on this platform do not necessarily represent the views or policy of Multimedia Group Limited.
Tags:
coronavirus pandemic
coronavirus vaccines
Russia