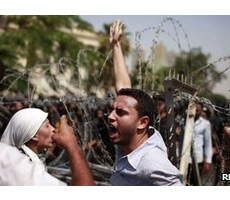 Egypt’s supreme court has ordered that parliament’s lower house be dissolved following a ruling that last year’s election was unconstitutional.

It has ruled that a third of seats elected under the “first-past-the-post” system were “illegitimate”.

In a separate ruling, the court has decided that former Prime Minister Ahmed Shafiq can continue to run for president in elections this weekend.

The court rejected a law that would have barred him from standing.

Mr Shafiq is standing against the Muslim Brotherhood’s Mohammed Mursi. The pair are in a tight run-off following a first round of elections in May.

The court was considering the validity of last year’s parliamentary election, because some of the seats were contested on a proportional list system, others on the first-past-the-post system.

According to the official Mena news agency: “The constitutional court affirmed in the details of its verdict that the parliamentary elections were not constitutional, and the entire composition of parliament has been illegitimate since its election.”

The head of the supreme court Farouk Soltan told Reuters: “The ruling regarding parliament includes the dissolution of the lower house of parliament in its entirety because the law upon which the elections were held is contrary to rules of the constitution.”

Many of the seats ruled unconstitutional were won by the Muslim Brotherhood.

The supreme court had also been asked to rule on a law passed by parliament – the Political Exclusion Law – which bans senior officials from former President Hosni Mubarak’s regime from standing for office.

The court ruled that the law was unconstitutional, and therefore decided that Mr Shafiq’s candidacy was still valid.

This weekend’s election will therefore go ahead as planned.

There was a large security operation outside the court as demonstrators gathered for the judgement.

A barbed-wire fence was constructed around the court grounds to keep protesters out. Rows of police in riot gear stood guard.

Many demonstrators shouted slogans and held posters demanding that Mr Shafiq be disqualified.

One activist, Mohamed Abdel Quodous, said Mr Shafiq should be disqualified because he was considered a “remnant of the old guard” and was a “humiliation to Egypt and its revolution”.