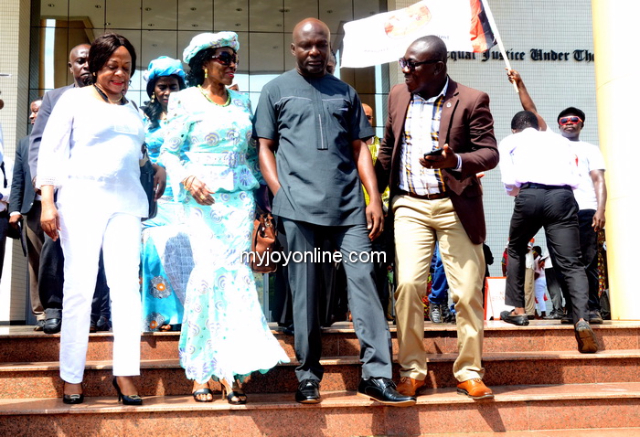 An Accra High Court presided over by Justice Goerge Koomson struck out the suit on procedural grounds.

He explained that it is against procedures of court to file a joint application praying for the EC's decision to be reviewed and at the same time demand for the enforcement of the Presidential candidate's fundamental human right to vote and be voted for.

He described the suit as incompetent. The court has also fined the applicants GHC10,000.

Ace Ankomah who is counsel for Nana Konadu Agyeman Rawlings told the press, he will file a fresh suit by close of the day.

Nana Agyeman Konadu who is former First Lady was disqualified after the Electoral Commission said she failed to collect the 432 signatures of qualified voters, a requirement of Regulation 7 (2) (b) of CI 94.

The EC said one person, Salifu Abdulai, who endorsed her presidential nomination forms, was not a qualified voter because he had illegally registered twice and is therefore on a list of excluded voters.

Of the three presidential candidates who have been to court to challenge their disqualification, Nana Konadu Agyemang Rawlings is the first to hit a snag.

Presidential candidate of the Progressive People's Party Dr. Paa kwesi Nduom has closed his case and is expecting judgment Friday.

All Peoples' Congress presidential candidate Hassan Ayariga is expecting his counsel to make oral submissions next Tuesday followed by judgement expected next Friday.

The three presidential candidates are among 12 who were disqualified from the December 7 presidential elections.