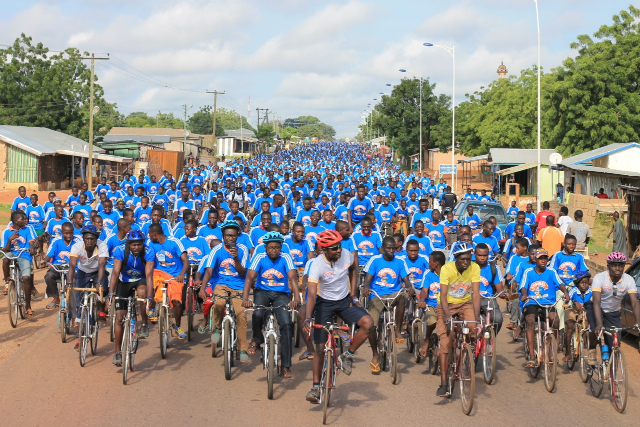 The Homowo edition of the Cowbell Cycling Challenge will start on Sunday, August 25, 2019, with over 80  professional cyclists expected to take part.

The cyclist will compete for honours in a three-stage competition starting with Osu this weekend. Pampram on August 31 and then the grand finale on September 7 in Teshie.

The Osu stage will cover over 81 kilometres and see the cyclists ride along a three-kilometre loop.

Twenty cycling clubs from across the country are expected to participate in the race which starts at the Castle Junction bus stop with the riders expected to race to the Kingdom Books & Stationery and make a turn back to the starting point for 27 laps.

According to the Brands Manager of Cowbell, Mr Joseph Ashong, the race is being held as part of activities to commemorate the Homowo festival celebrated by the Ga people of the Greater Accra region of Ghana.

He said the organization of the three-stage race was a collaborative effort between Promasidor Ghana Limited and the Greater Accra Cycling Association.

Mr. Ashong added that the Osu stage will be followed by similar races in Prampram and Teshie on August 31 and September 7 respectively.

“All the three stages will have prizes but the cash prizes will be handed out to the overall winners on September 7. The prizes include souvenirs, Cowbell-branded cycling equipment as well as Cowbell products,” Mr. Ashong told the Daily Graphic in an interview on Tuesday.

According to the Chairman of the Greater Accra Cycling Association, Kofi Boakye Yiadom, the cyclists will amass points over the three stages and the overall winner will be crowned after the Teshie stage.