Cristiano Ronaldo scored a hat trick to lead Real Madrid into the Champions League semifinals with a 3-0 victory over Wolfsburg, overturning a two-goal aggregate deficit.

Two Ronaldo goals in as many minutes brought Madrid back level inside 20 minutes, and a free kick in the 77th minute completed the turnaround at the Santiago Bernabeu.

With Wolfsburg protecting their 2-0 advantage from the first leg, Real Madrid quickly went on the attack, with Sergio Ramos' looping header striking the top of the bar.

Ronaldo opened the scoring in the 16th minute when Dani Carvajal's cross took a deflection off of Wolfsburg defender Vieirinha directly into the Portuguese's path.

And a minute later Ronaldo had his second from a glancing head following a Toni Kroos corner. 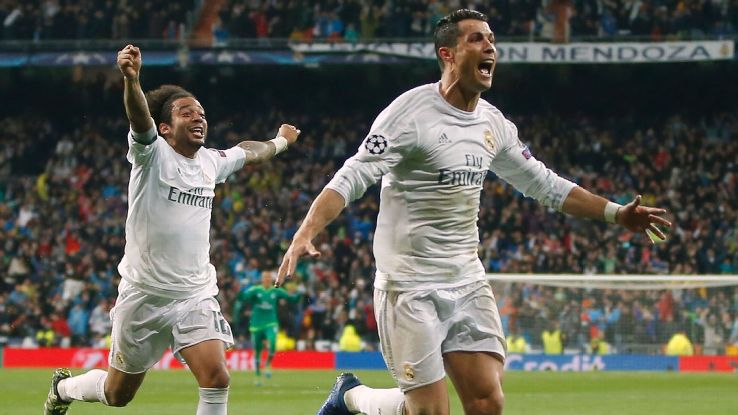 From that point Wolfsburg enjoyed slightly more possession, though they could only force some simple saves from Keylor Navas.

The visitors' best chance came when Bruno Henrique found himself with space in the box but a poor first touch allowed Real's defenders to recover in time to block his shot.

Real Madrid thought they had the lead early in the second half when Ramos' header from a corner glanced off the inside of the post and bounced behind a surprised Diego Benaglio, though the Wolfsburg keeper was able to cover before it crossed the line.

A Luis Gustavo foul on Luka Modric set up Ronaldo for a free kick in the 77th minute, and he delivered with a low shot around the Wolfsburg wall that crept inside the post.

With 16 goals in the Champions League this season, Ronaldo is one tally away from his own competition record.

A Wolfsburg goal still would have put the Bundesliga side through, but they could not find the opportunity and Real actually had the better of chances with Benaglio denying both Benzema and Gareth Bale.