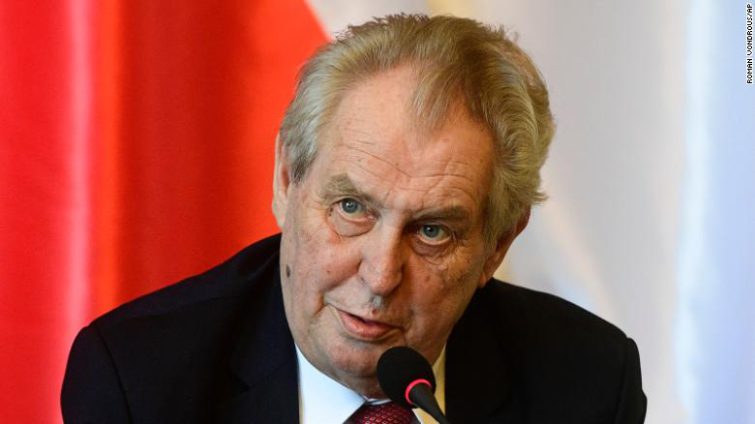 Czech President Miloš Zeman was taken into intensive care on Sunday, shortly after holding talks with the country’s populist prime minister, whose leadership hangs in the balance following a dramatic election.

The president plays a crucial role in appointing the next prime minister after the election. But the Czech Republic’s political future is now in limbo while Zeman is treated at Prague’s Central Military Hospital.

“The reason for [Zeman’s] hospitalization is complications from the illnesses for which he has been receiving treatments,” doctor Miroslav Zavoral said in a brief statement to the press on Sunday, adding he could not yet talk about the prognosis.

Video from outside the presidential chateau in Lány, west of Prague, showed an ambulance leaving the compound with a police escort and limousines.

The 77-year-old Zeman has been suffering from a range of health problems over recent years. On advice of his doctor, he voted in the country’s general election Friday from the presidential retreat, instead of at a school in Prague as was previously scheduled.

Zeman’s admission to hospital comes at a pivotal moment in deciding the Czech Republic’s new leadership. Indeed, one of the president’s main constitutional roles is to choose the next prime minister to form a government.

Zeman was taken to hospital shortly after speaking with Prime Minister Andrej Babiš — a day after a general election where Babiš’s ruling party ANO appeared to have lost its grip on power, and the two opposition coalitions who won a majority said they planned to form the next government together.

Zeman has not said when or whom would be asked to form the next government. But he has previously indicated he would ask the leader of the largest single party — not any coalition.Complicating matters further, Babiš’s ruling ANO party won the most seats among individual parties — but has no clear path to a majority in the lower house.

Dramatic day at the ballot box

Andrej Babiš’s ANO party was edged out by the narrowest of margins by the two opposition coalitions trying to unseat him, according to the Czech Statistical Office.

The center-right alliance Spolu (Together) won the most votes with 27.79% of the ballots, followed by Babiš’s ANO party with 27.12%, and the centrist PirStan coalition on 15.62%.

“We are the change. You are the change,” Spolu coalition leader Petr Fiala said Saturday, claiming victory before a cheering crowd.

The leader of the PirStan coalition, Ivan Bartoš, said talks with Spolu “on the possibilities of forming a new government” would likely begin on Saturday.

“The dominance of Andrej Babiš is over, and the democratic parties have shown that the era of chaos will probably be behind us,” Bartoš said.

After winning a combined 108 seats in the 200-seat lower house on Saturday, talks between the two coalitions who campaigned against Babiš ended with the leaders of the five parties in the combined coalitions signing a memorandum to work together to form the next government.

A new government would distance the Czech Republic from populist parties in Hungary and Poland, which have increasingly come under fire for rolling back European Union democratic values.

The tight election also comes just days after a Pandora Papers investigation into controversial financial dealings by Babiš and other world leaders.

The report claimed the Czech prime minister secretly moved $22 million through offshore companies to purchase an estate on the French Riviera in 2009, before he entered politics.

Responding on Twitter, Babiš said he had “never done anything unlawful.”

A businessman who is worth about $3.4 billion, according to Bloomberg, Babiš has railed against the elite since he became prime minister in 2017, vowing to crack down on tax avoidance.

But his premiership has been dogged by long-standing allegations of financial impropriety.