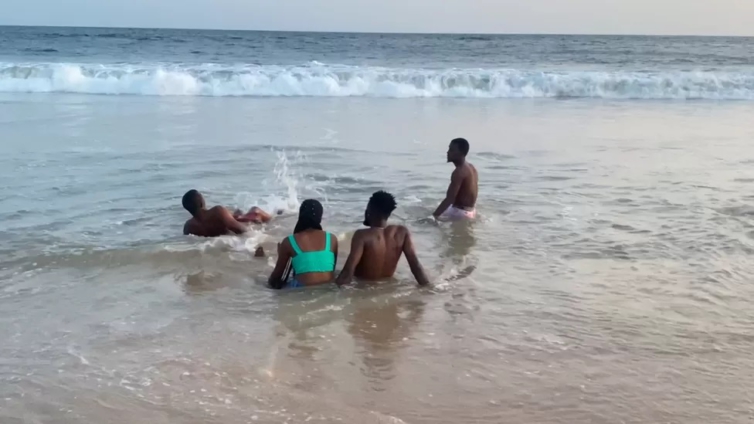 The drowning of the three-year-old son of Afrobeats star Davido in the swimming pool at his home in Lagos last month has thrown a spotlight on the safety of swimmers in Nigeria.

The death of Ifeanyi Adeleke came four years after the one-year-old son of another Nigerian singer, D’Banj, died in similar circumstances.

Having access to a swimming pool in Nigeria is rare, and mostly the preserve of the wealthy, but it is something that many aspire to so basic safety measures and knowing how to swim could be vital to saving lives.

Although their city is surrounded by water – numerous lagoons and waterways, as well as the Atlantic Ocean – many Lagosians are unable to swim.

“This is one death too many,” says Bolanle Edwards of Lagos-based Strap and Safe Child Foundation, referring to Davido’s son.

She has been calling for increased pool safety for children across the country for over a decade.

At one of Lagos’ beautiful seafronts there was a clear awareness of about these points.

Parents watching their children splash in the foamy waves of Landmark Beach reflected on the news about Davido’s son.

“I was extremely sad because it’s not something you wish on anyone,” said Femi Nedd, whose three children were enrolled in classes to learn how to swim before they could walk.

“Swimming is not a luxury, it’s a life skill because you might never know when you need it.”

Though her children have been swimming unaided since they were four, she says supervision is key and the presence of trained lifeguards at the public beaches they use gives her reassurance.

Adeola Folivi said her 12-year-old daughter, a Davido fan, was distressed at hearing what happened to the star’s son – and drove home the importance of swimming lessons.

“I encourage my nieces and nephews and friend’s children [to enrol in swimming lessons] – as long as it is done in a proper environment, with the proper precautions taken, with the proper safety devices,” she said.

Those with private swimming pools have also been hit by the news of the drowning.

Adekunle Akanbi, who shares a pool with his neighbour in the south-western city of Ibadan, became very worried after hearing about the Davido tragedy.

He told the BBC that the children in his compound would now be more closely monitored around the pool: “They can swim perfectly but still under proper supervision.”

This is the same for Nora Chukwuma in the city of Port Harcourt in the south-east.

She said all doors leading to her pool area were properly locked to stop children from getting close to the water without an adult present.

“We are currently working on installing a pool barricade,” she added.

Statistics on drowning in Nigeria are hard to get hold of but safety campaigner Ms Edwards says that when it comes to swimming pools, there have been 18 reported drowning deaths over the last four years. Eight of those happened this year alone.

The World Health Organization (WHO) lists drowning as the third leading cause of death through unintentional injury worldwide.

It says an estimated 236,000 people die from drowning every year. Around 90% of these deaths occur in low- and medium-income countries like Nigeria.

In an effort to prevent such accidents, the Lagos state government in September urged swimming pool operators and beach owners to beef up the precautionary measures around their facilities.

In 2017 it introduced state-wide safety regulations that sought to ban operating a swimming pool service without permission and a lifeguard in place. But without proper enforcement and prosecution these are often ignored.

Ms Edwards says that since the introduction of trained lifeguards, there are now fewer accidents at Lagos’ private beaches.

But few states have similar regulations in other parts of the country.

Knowledge about how to swim, as well as the dangers of water, are not widespread.

In 2014 the Nigerian navy said it was introducing compulsory swimming lessons for all its officers after it noticed many personnel were not good swimmers.

As swimming is a survival skill, parents need to consider it as important as other skills, argues swimming coach Tough Atelemo, who has taught hundreds of young kids – some as young as six months – over the last two decades.

“When you are training a child, you have to train them how to survive,” she says.

She adds that it should be included in the early years school curriculum, which is also a recommendation of the WHO.

Installing guardrails, covering pools, fencing in swimming pools and putting children in play pens when they are close to the water are some practical measures that could reduce the risks around water, the WHO says.

Ms Edwards echoes this, saying that pools should have a fence on all sides separating them from the house.

Technology, such as motion-activated lighting and CCTV, can also help protect people, especially children, from the risk of drowning, says architect Daniel Ette.

But “nothing absolutely replaces physical barriers and adult supervision”, he adds.

It is unclear what kind of safety measures were in place at Davido’s home.

A police autopsy concluded that his son died from drowning but investigations continue. They are reviewing the CCTV footage of the house, while they hold Davido’s nanny and cook in custody for further questioning.

DISCLAIMER: The Views, Comments, Opinions, Contributions and Statements made by Readers and Contributors on this platform do not necessarily represent the views or policy of Multimedia Group Limited.
Tags:
Davido
Nigeria
Son drowning
Swimmers