Decision on approval of Ghana’s first GMO crop will be based on science, not fear – Biosafety Authority 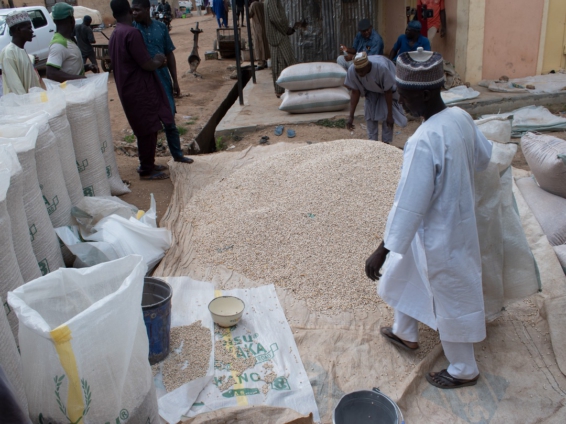 Government says its decision on whether to approve Ghana’s first genetically modified crop will be based on science and not fear.

The National Biosafety Authority (NBA) and the Ministry of Science and Technology, which regulate GMOs, both say proven scientific knowledge and not misinformation will inform their decision on whether to allow the open cultivation of the GM cowpea, resistant to the pod borer pest.

GM cowpea has already been approved in Nigeria, where farmers are harvesting their first crop.

“If GMOs are bad, and they can cause cancer and the science is there, the proof is there, we will listen. But if it is based on propaganda to hang it without any basis, that we will not take,” NBA CEO, Eric Okoree said in an interview with Joy Business’ Emma Davies.

“We are the regulators. We are friends to those who speak for and those who speak against. But you will bear me out that a lot of information has gone out there. Whether they are scientifically sound or not, we are yet to tell.

Mr. Okoree said the NBA appreciates the work of anti-GMO groups in the country but is urging them to base their opposition on science and not emotions.

“All over the world, wherever there is scientific innovation and introduction of that technology, the public rise against it. And you will get somebody whose business is to lead the confrontation,” he noted. “And in Ghana, you will find Food Sovereignty Ghana doing that.

And we appreciate that. Because all these go to make the regulatory system effective. Just that we will say whatever information they put out there should be scientifically sound. And should not play on the emotions and create fear in people,” he added.

“I am not advocating for GMOs introduction,” he said during a recent visit to the NBA offices. “We must have a debate. But the debate should not be based on fears, which have no basis. It should be based on science and what is even good for this country so that we can make informed decisions,” he added.

Scientists at the state-owned Savannah Agricultural Research Institute (SARI) of the Council for Scientific and Industrial Research in Ghana have completed trials on the pest-resistant Bt cowpea (beans) and will soon apply for environmental/commercial release of the variety.

The GM crop is expected to help farmers dramatically reduce their use of pesticides on cowpea farms, while also enjoying better quality and higher yields of this important staple food.

A destructive pest known as Maruca pod borer has been responsible for low yields of the protein-rich cowpea, forcing farmers to spray their fields with pesticides up to eight times in the 12-week life cycle of the crop.

The GM cowpea resists the pest, which can destroy up to 80 per cent of all cowpeas in farmers’ fields. The insects are particularly devastating because they damage not only the flowers and the buds, but also destroy the pods, resulting in grain and yield loss.

The GM variety, called pod borer-resistant (PBR) cowpea, helped farmers cut down pesticide use on their farms by up to 80 per cent during field trials supervised by SARI scientists.

The resistance is the result of the introduction of a gene from a naturally occurring bacteria, Bacillus thuringiensis (Bt), that has the capacity to control a range of pests. The Bt variety causes harm to specific pests but not humans or beneficial insects.

The scientists working on the variety are reportedly awaiting the official composition of a new NBA board before submitting the application for commercial/environmental release to the authority.

“The GMOs that we are researching on in this country, cowpea is the number 1. And the cowpea we have in Ghana is what has received the gene. And so, it’s not foreign… I know they are at the point of release,” Mr Okoree disclosed.

He offered assurances that the approval process will be transparent and solicit public comment.

“So, CSIR has to come to the Biosafety Authority, pick up the form for release, submit it and then we take it through risk assessment. But most importantly, [there’s] public assessment or consultation. The public must make inputs,” he explained.

“So, when we get such information [application], we put it in the public domain. Advertise it for the public to come for copies and make inputs. So, in deciding, the board will look at the information in the application, the public input, socioeconomic implication and risk assessment. So, it’s a process. If the applicant comes, we will look at it. Until they come, we are waiting,” Mr Okoree added.

After an application is submitted, the authority has 180 days to respond. Approval for environmental release will mean the Bt gene has been de-regulated, allowing farmers to grow the varieties at various locations across the country.

Then a process will kick in that is similar to the one followed by all other conventional, non-GM seeds. Scientists will gather data on the multi-locational trials and submit a request to the Varietal Release Committee of the Ministry of Food and Agriculture for permission to market the seeds to farmers.

Research to produce Ghana’s variety of GM cowpea has been ongoing since 2008 and the process is not yet complete.

Dr Richard Ampadu Amenyaw, a senior research scientist at the Science and Technology Policy Research Institute (STEPRI) of the CSIR, said researchers are going through the entire process meticulously to help heighten and ensure public trust in the variety.

“It tells you how careful we are trying to be. We don’t want to jump the gun. We are going through the processes step by step,” he explained.

Besides the GM cowpea, field trials are also ongoing to produce Ghana’s first GM rice variety. The nitrogen- and water-use efficient and salt-tolerant (NEWEST) rice has been engineered to require less nitrogen fertilizer, tolerate drought conditions and grow in salty soils — and still give good yield.

Confined field trials conducted at the Crop Research Institute of the CSIR in Kumasi on plants with just the nitrogen use-efficiency trait show the variety yields between 14 and 25 percent better than traditional varieties.

Nitrogen fertilizer is a major source of greenhouse gas emissions and is often too expensive for smallholder farmers to afford.