A US man is suing a bank in Detroit after employees called the police when he tried to deposit cheques at their branch.

Sauntore Thomas had attempted to put in money he had won after settling a racial discrimination lawsuit against his former employer.

But the bank allegedly said they would have to verify the cheques. As Mr Thomas waited, the police arrived.

TCF bank has since apologised to Mr Thomas in a statement.

“Local police should not have been involved,” the statement read, according to the Detroit Free Press. “We strongly condemn racism and discrimination of any kind.”

The bank said they could not validate Mr Thomas’s cheques and said they take extra precautions when large sums of money are involved.

But Mr Thomas, a US Air Force veteran, is now suing the bank. “They discriminated against me because I’m black. None of this would have happened if I were white,” he told the Free Press.

His lawsuit says he faced resistance for “banking while black”, the New York Times reports. 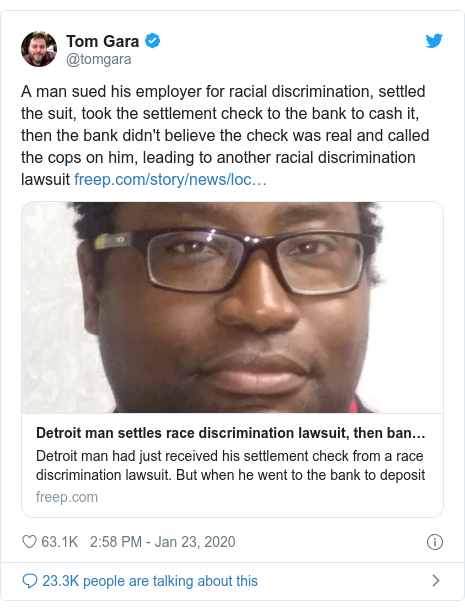 Mr Thomas, a Detroit resident, had successfully settled a lawsuit he lodged against his former employer for a confidential amount, and went to TCF bank to deposit the cheques. He had held an account at the bank for almost two years.

But when he tried to open a savings account for the money at the Livonia branch, staff said they would need to verify the cheques. The assistant bank manager – herself a black woman – went to a backroom, before returning and telling Mr Thomas their team member who verifies cheques was not there. She allegedly asked him how he got the money.

Ten minutes later – after Mr Thomas said he would wait in the lobby for the staff member to return – four police officers arrived.

“I didn’t give them any type of indication that I was getting upset,” he told Buzzfeed News, mindful of high profile cases in which black people have been killed by police officers.

“I wanted to make sure I stayed as level-headed as possible, because I wasn’t going to be the next person on the ground saying, ‘I can’t breathe.'”

Mr Thomas told the Free Press he called his lawyer, who provided them with proof of the settlement, but still he could not deposit his money.

Instead, Mr Thomas closed his account and went to the branch of a nearby competitor. He set up a new account with them, and his money had cleared without issue in a matter of hours.

“I will be vindicated because I didn’t do anything wrong,” Mr Thomas told the Free Press.

Police began an investigation into Mr Thomas for fraud during the incident, but have since closed the case.