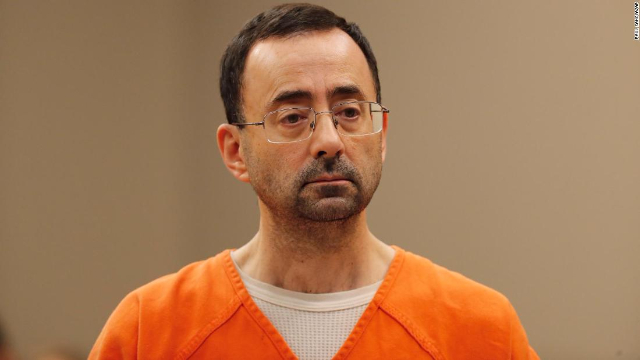 Former US Olympic gymnastics team doctor Larry Nassar has been sentenced to 40 to 175 years following testimony from over 150 women who accuse him of abuse.

"I will carry your words with me for the rest of my days," Nassar turned and told his victims in the courtroom.

Nassar, 54, pleaded guilty to multiple counts of sexual assault against girls and young women, including Olympians.

Judge Rosemarie Aqualina told Nassar during the sentencing he will "be in darkness the rest of his life".

She added that she would not send her dogs to the former sports doctor, adding: "I've just signed your death warrant".

Following seven days of emotional testimony from Nassar's alleged victims, he was given an opportunity to address his accusers in court.

"What I am feeling pales in comparison to the pain, trauma, and emotional destruction that all of you are feeling," he told the packed courtroom.

"There are no words to describe the depth and breadth of how sorry I am for what has occurred," he added.

A story of survival

Sitting in court throughout seven day hearing, the stories have been strikingly similar – the former USA gymnastics team doctor would call the women in for treatment, but instead of taking away their pain, he stole their innocence. Some were so young they didn't realise until years later that they had been sexually abused.

As Larry Nassar sat in his prison overalls, just metres away from them survivor after survivor looked him in the eye and reminded him of what he'd done to them. And that's been the most extraordinary thing about this hearing. While the content of their testimony has been harrowing, it's also been inspiring.  For survivors of sexual abuse it's hard to relive the experience, let alone do so in front of your