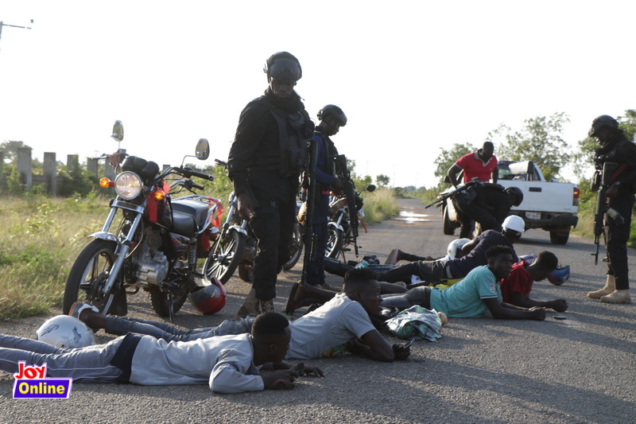 Twenty-three more alleged secessionists have been put before the Kaneshie District Court for allegedly launching an attack on the Mepe and Aveyime Police stations.

The accused were said to have overpowered police officers and broken into their armories and made away with 17 AK-47 assault rifles, five pump action guns, one Mack-four gun, one short gun, two Mack three guns, three SMG rifles, 11 rubber bullets, and 25 rounds of 37mm tear gas cartridge and 300 rounds of AK-47 ammunition.

The court did not take their pleas and remanded them into police custody to reappear on November 17.

The Court presided over by Ms. Ama Adomako Kwakye, turned down the bail application made by Mr. George Asamani, on behalf of some of the accused.

The court held that it was not clothed with the jurisdiction to grant the accused persons bail.

It also could not take their pleas because some of the counts were not linked to the accused persons.

It, therefore, asked them to seek bail at the appropriate quarters.

Mr. Asamani, in his argument for bail, said it was unlawful and unacceptable for the prosecution to pray the court to remand the accused persons.

According to defence counsel, from the facts narrated by the prosecution, it looked like the police arrested some of the accused in September, this year.

Additionally, counsel held that the police could not tell the court that since September, they were still investigating the case.

The Prosecution, led by Sergeant Richard Amoah,  vehemently opposed the grant of bail indicating that it would be premature for the accused to be granted same as the case was still under investigation.

It said the accused persons were put before the court so they could be remanded into lawful custody.

The case of prosecution was that the suspects were members of a prohibited organisation, namely Western Togoland Foundation and related organisation.

On or before September 25, this year, the suspects agreed with a common purpose to secede from the Republic of Ghana and pursuant to their agreement, they and others at large, formed armed groups to enable them to carry out their plan.

Prosecution said on September 25, this year between the hours of 0200 hours and 0700 hours, one armed group, including those suspects and others at large, attacked the Aveyime and Mepe Police stations in the Volta Region.

The suspects overpowered the police officers at the stations, broke into the armouries and made away with some guns. They also took away the Police Patrol Vehicle at the Aveyime Police Station.

The suspects also broke into the rooms of police officers at Aveyime Police Station and made away with personal effects including monies and police accoutrements with the value yet to be quantified.

They blocked two major roads leading to the Volta Region from Accra and Abotoase Junction, a suburb of Juapong and new Akrade and denied road users from both sides access.