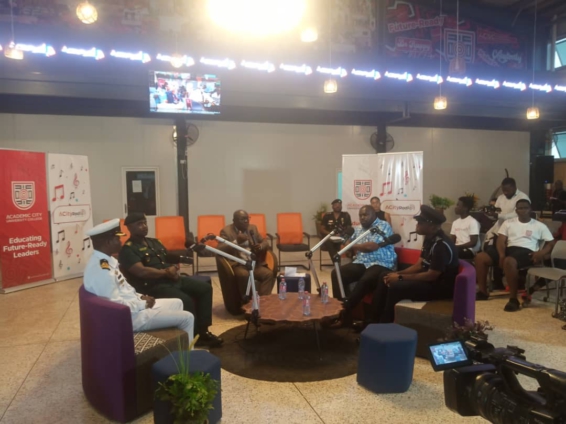 The Service’s Head of Public Affairs Department, Chief Superintendent Michael Amoako Attah on Wednesday made this clarion call when he participated in the Fireside Conversation at Academic City University College.

According to him, despite government’s effort to keep terrorists at bay, the mission will not be achieved without the support of the general public.

Thus, interacting with the tertiary students on the topic, “The Concept of Terrorism, those Behind It, and the Need for Student Awareness”, Mr. Amoako Attah highlighted the need for the populace to contribute their quota towards security in the country.

“So I will appeal to every Ghanaian here and especially students – in your communities, hostels – definitely you will see things that are not normal. You might see someone visiting a site that might have posts that suggest threats, don’t just see it but say something.

“Let us all be alert and sensitive to issues around us and report to the security services for the proper directions to be given,” he noted.

An Analyst at National Counter-Terrorism Fusion Centre, National Security Daniel Obeng Boakye emphasised that terrorism is real, thus requires all and sundry to keep it out of the country.

He intimated that the effects of terrorism can bring a country to a standstill.

“Impact of terrorism cuts across. Education, politics, social life and the economy are all affected. We cannot comfortably sit here today and have this conversation if there are terrorist attacks [in the country],” he explained.

Taking his turn, the Director of the National Counter Terrorism Department of Ghana Police Service, cautioned the students against prank calls.

DSP Dr. Debrah Silase reiterated that terrorism is a serious matter, hence must not be joked about.

“When we say, ‘See Something, Say Something’, it doesn’t mean just call us with fake information. When we gave out the 999 helpline, in just 24 hours there were 10,000 prank calls. Those are not the ones we are talking about.

Meanwhile, the Acting Director of the Strategic Intelligence Department of the Ghana Armed Forces, Commander Philip Odoi-Narh says security forces are geared up to ensure that the territorial integrity of the country is safe.

According to him, the GAF has adopted the 3Ps and 1R strategy (Prevent, Pre-empt, Protect and Respond) to ensure the safety of the state.

However, he added his voice to the need for the students to be alert about their surroundings.

Speaking to the media on the sideline of the programme, the Public Relations Officer of Academic City College, Cyril Quansah-Quainoo, said the conversation is aimed at involving students and the youth in general in the fight against terrorism.

He noted that the topic is a crucial one, thus, the need to engage the youth.

The Fireside Conversation is a talk show on A City Radio, a campus-based radio station for Academic City University.

DISCLAIMER: The Views, Comments, Opinions, Contributions and Statements made by Readers and Contributors on this platform do not necessarily represent the views or policy of Multimedia Group Limited.
Tags:
Academic City University College
Anti-terrorism campaign
Ghana Immigration Service (GIS)
See Something Say Something