A van containing gas canisters has been discovered near a music venue in Rotterdam, hours after a tip-off from Spanish police led to the cancellation of a rock concert.

The driver of the Spain-registered van was detained by police, Mayor Ahmed Aboutaleb told journalists.

US band Allah-Las – which often gets threats because of its name – had been due to perform at The Maassilo.

But the warning led to the gig being called off at the last minute.

However, Mr Aboutaleb said it was not clear if the van and the terror threat were linked. The warning came amid a heightened sense of alert after attacks in Spain.

The Spanish driver was arrested on a nearby road and taken for questioning, police said.

A bomb squad was examining the van, reports said. Police wearing bulletproof vests were at the venue, which was evacuated. 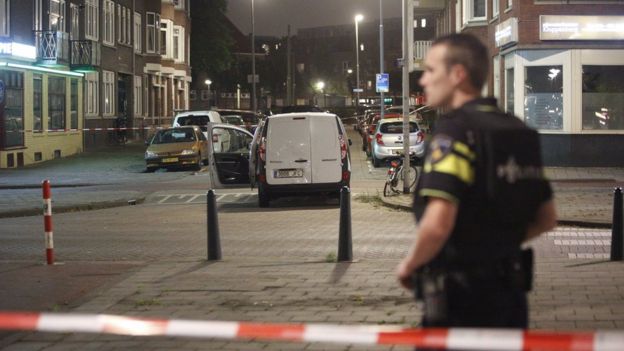 "The ring that the police set up around the concert hall led to the detention of a van with gas bottles," Mr Aboutaleb said.

"Whether the van with gas bottles can be linked to the threat, that cannot now be established," he added, warning against "swift conclusions".

The tip-off from Spanish police came after last week's deadly attacks in Catalonia, where 15 people were killed in attacks in Barcelona and the town of Cambrils.

Those attacks followed a blast at a house full of gas canisters where the jihadists involved in the attacks were reportedly preparing explosives.

In an interview last year, the group Allah-Las told The Guardian newspaper that they regularly received messages from Muslims offended by the use of the word Allah – Arabic for God – in its name.

The group said it had wanted a religious-sounding name after being inspired by the group Jesus and Mary Chain.