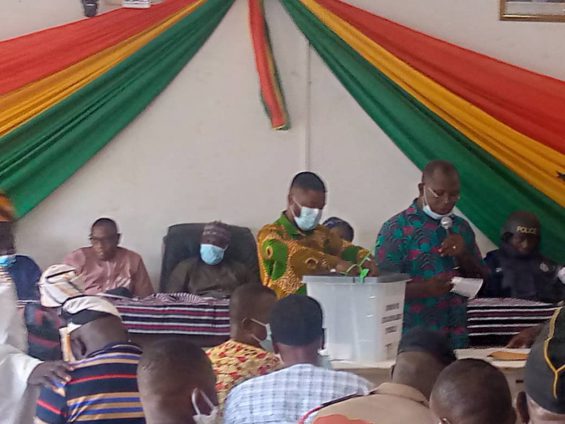 Fifteen (15) traditional rulers in the East Gonja Municipality of the Savannah Region, have expressed their anger towards twenty-five (25) Assembly Members who voted against the President’s nominee for MCE, Mohammed Tamimu.

The Chiefs, led by the Paramount Chief of Kpembe traditional area, Kpembiwura Dari Bismark Haruna, said the Assembly Members, in spite of several pleas and mediations, went ahead to humiliate them (Chiefs) by rejecting the nominee for the second consecutive time.

The nominee, Mr. Mohammed Tamimu started his Political career with the ruling New Patriotic Party (NPP) in 2004 as an appointed Constituency Secretary for two consecutive terms. This happened after he crossed carpet from the National Democratic Congress (NDC).

He was later appointed Municipal Chief Executive for East Gonja by President Akufo-Addo and re-nominated for a second term but was rejected twice, by the Assembly Members.

Mr. Tamimu polled 10 out of the 34 votes cast by members in the first instance. But he was re-nominated by President Akufo-Addo leading to he obtaining only nine votes.

But the Chiefs are not happy with the outcome because of the role they played in the mediation process.

“Let me state unequivocally that, my Elders and I very well know you, the disgruntled ones among us. Trust me, at the appropriate time, I shall put out the names of those disgruntled ones with empirical evidence implicating them for all to know and see, if they do not turn over a new leaf,” Kpembewura Haruna insisted.

The Paramount Chief added, “with grave concern, I deem this misfortunate conduct as a great disappointment, disrespectful and humiliating to my person, my Elders and by extension, the President of the Land who has done us much honour as a people and therefore, does not deserve that at all”.

Kpembewura Dari Bismark Haruna before becoming a Chief was the District Chief Executive for the same Assembly, thus does not understand why despite reaching an amicable agreement with the Assembly Members, they still rejected the President’s nominee.

He said prior to the confirmation process, a stakeholder engagement session involving religious leaders and his Sub-Chiefs among others, was held with the understanding that all grievances have been addressed for the confirmation of the nominee, only to be told otherwise.

The statement which was read by a Sub-Chief, Lepowura M.N.D Jawula, also gave the Assembly Members the option to either apologize to the Chiefs and traditional area or face rejection and humiliation.

“My Sub-Chiefs and on my own behalf, and also, the entire traditional area, wish to emphatically, put on record that, given this turn of events, we will withdraw completely, our support and cooperation from all future endeavors of the Municipal Assembly if the actors of this bad faith do not render an unqualified apology to us, and by extension, to the President of the land, and also accept to adhere strictly to the agreement reached during the Stakeholder engagement”.

Kpembewura Dari Bismark Haruna also reassured President Akufo-Addo of his skin’s unflinching support to enable him (President) carry on with his vision for the area.