EC allowing itself to be used for diabolic agenda – Mahama 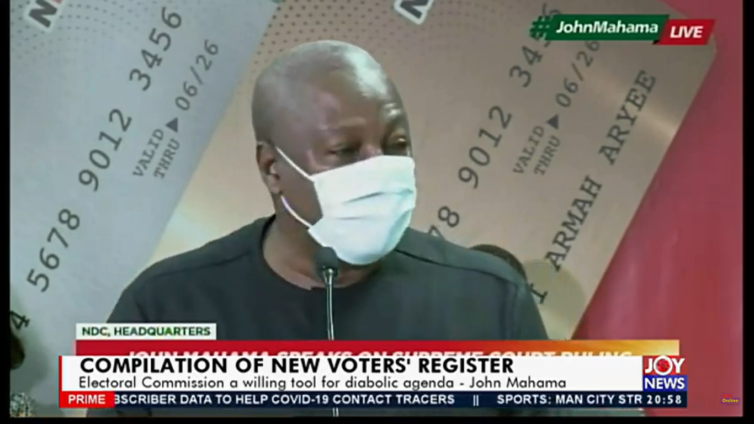 Flagbearer of the opposition National Democratic Congress (NDC), John Mahama says the Electoral Commission has allowed itself to become a tool for government to implement a diabolic agenda.

Speaking on the Supreme Court’s Ruling on the compilation of the new voters’ register at a press briefing, the former President said the governing New Patriotic Party knows it has failed citizens and may lose the upcoming general elections.

Hence, the NPP has joined forces with the Electoral Commission to compile a new voters’ register which will disenfranchise millions of Ghanaians, especially, now that birth certificate and the old voters’ ID card voters cannot be used as proof of identification.

“It is deeply regrettable that the Electoral Commission which should be independent and has carved a niche for itself as a well-respected Commission in the whole of Africa has today made itself a willing tool to the execution of this most diabolic agenda.

“The exclusion of the old voters’ ID card which has been used to conduct several elections under the current leadership of the EC and from which the current president derives his mandate is aimed at deliberately disenfranchising some Ghanaians who have forcefully been branded foreigners without any basis,” he stated.

Touching on the identification requirements, Mr Mahama indicated that the National Identification Authority (NIA) itself has admitted that many people have not yet been registered as well as the detection of numerous duplicate cards.

This issue and several others, he said justified the NDC’s quest to turn to the Supreme Court for arbitration but, the said relief was not granted.

“Brothers and sisters the Right to vote, however, must not be curtailed by this minor setback.”

He then encouraged citizens to turn up in their numbers to participate in the upcoming registration exercise which has been scheduled for Tuesday, June 30 to Thursday, August 6.