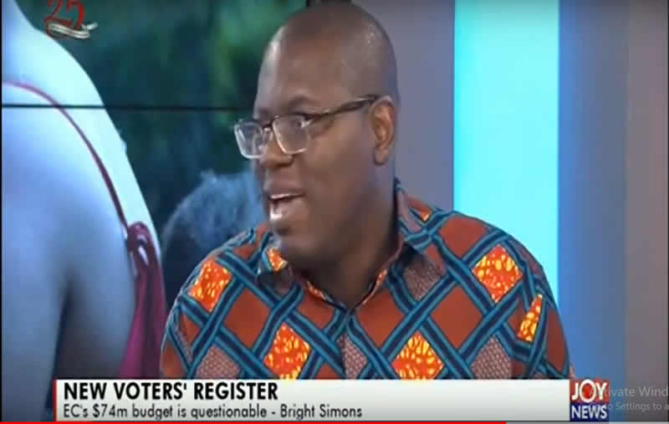 Think tank, IMANI Africa, is intensifying its campaign against efforts by the Electoral Commission (EC) to acquire a new voting system, as it calls on the media to join the fight.

Vice President of the think tank, Bright Simons, said Wednesday that questionable figures that the EC has released as the cost for the new system raise concerns about the true intentions of the election management body.

Speaking on current affairs programme, PM Express, on JoyNews, Mr Simons said an important indication that the EC’s proposed cost for the acquisition of a new system was questionable is the source of its quotations.

The EC is fending off criticism from various civil society groups and the opposition National Democratic Congress (NDC) for an ongoing process it has initiated to acquire a new electoral management system.

The EC has justified its plan to acquire the new system on grounds that the current system – both the hardware and software components – are obsolete and inefficient.

It says, for instance, that the Biometric Verification Devices (BVDs) have high failure rates. It also said it will cost more money to repair the old BVDs than acquire a new one. According to the EC, it will cost in excess of $70 million to refurbish the old system but $56 million to acquire a new one to be used for the December 2020 general elections.

But Mr Simons contests these figures because the EC was obtaining these figures from inappropriate sources and argues that the analysis that formed the basis of the EC’s estimation is flawed.

“They say they talked to STL [Superlock Technologies Ltd, former managers of the current voting system], but STL was sacked in December 2018 and since then, you [EC] have been managing this yourself. Why did you not go to the original manufacturers of the device and try and get a proper, validated quotation?” he quizzed.

The renowned tech wiz said the EC’s claim that it will cost $74 million to refurbish a new system is flawed because, it presupposes that the EC will have to purchase completely new BVRs and new software, which is untenable.

According to him, because EC buys new hardware periodically, it cannot be the case that all of BVRs are obsolete, stating that the EC even has BVRs that it has never used.

The Ghanaian social innovator said even if it was true that all the BVRs will be replaced, the EC failed to factor in the cost of acquiring new software – an estimated $8 million – and which would ramp up the total cost of EC’s decision to acquire a new system to over $80 million and not $74 million.

“That tells you that this EC lacks candour, has very little interest in being truthful and factual to the public, and the media shouldn’t allow them to get away with it,” he said.

IMANI Africa has been among the major resistance against the acquisition of the new voting system.

On Tuesday, it held a press conference at the International Press Conference to highlight its numerous concerns against the move by the EC.

At that presser, Mr Simons said it was impossible for the Commission to roll out a new voting system before the December polls.

IMANI Africa’s main arguments against the acquisition of a new system are as follows:

– That the EC’s claims that it will cost just $56 million to procure a new system whilst the cost of refreshing and maintaining the existing one would cost $74 million are untruths.

– A sham tender recently completed by the EC has revealed that the EC plans to spend $72 million on hardware alone. IMANI believes that by the time software and services are added the total costs for technology alone will amount to $85 million.

– Compared to a limited registration to capture just those not on the voters’ register, a fresh mass registration shall cost $50 million. Refreshing the existing technology at competitive prices will cost just about $15 million. Hence the total loss to Ghana of the EC’s actions amount to $150 million, if one factors in contingency. If the fact that thousands of perfectly good equipment shall be thrown away is also considered, the total loss rises.

– But economic cost is not the only thing to be worried about. The EC also bungled the procurement process, leaving a trail of evidence suggesting tender-rigging. This has opened the process to litigation and delay.

– The EC used one day to disqualify well-qualified bidders, claiming that they had reputational problems.

– The EC’s tender processes were so bad that the Chairman of the technical evaluation panel dissociated himself from the results forcing the EC to discard a 4-month process and compress it into a one-week evaluation. The company on whose behalf the tender was being manipulated is the only one whose score tally doesn’t add up. The EC insists that you must accept that 85 + 13 = 104 instead of 98.

– At any rate, the timeframe for negotiating a proper contract; designing better specifications to correct the many things the EC claims are wrong with the existing system; securing procurement approvals; integrating disparate software and hardware systems from different vendors; and deploying and testing the platform cannot be fitted within the EC’s artificial timeline of April 18th, 2020 for the commencement of registration.

– The proposed mediation process by Gamey & Co Alternate Dispute Resolution Center is wise and must be considered by all parties.