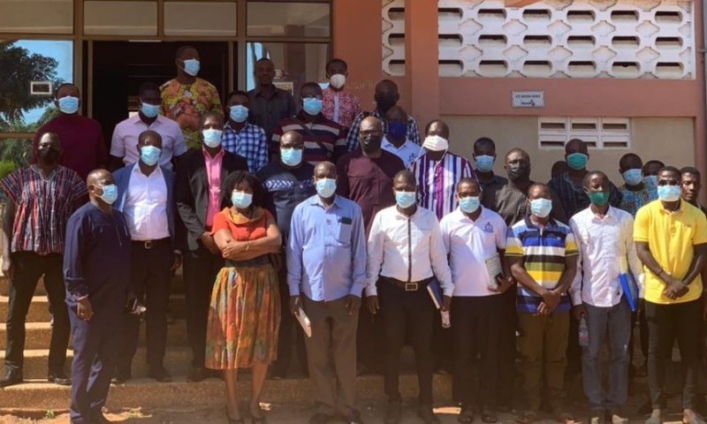 General Manager of the Volta Region branch of the Electricity Company of Ghana (ECG), Mr Emmanuel Lumor has asked Assembly Members to desist from illegal sale and installation of meters for their electorates.

He said Assembly Members have no business selling and installing electricity meters to the public as that is the preserve of ECG.

The General Manager who gave the caution when he led Management of the company in the region to engage members of the Ketu South Municipal Assembly, said the illegal practice had negative implications, not just for the company, but also for customers and warned that culprits would not be spared.

“We’ve been informed that some Assembly Members are smuggling meters from Togo and installing them illegally at exorbitant fees for customers. This action is unacceptable as the meters are substandard and likely to cause fire outbreaks very soon. As Assembly Members, you do not have the mandate to sell or install meters, so kindly desist from this act because the company would not hesitate to prosecute culprits.”

The engagement formed part of an ongoing effort by ECG to build mutually beneficial relationships with strategic stakeholders and sensitise them on operations of the company, dialogue on salient issues, and gather feedback to improve service delivery.

Mr Lumor announced some interventions the power distributor is making to provide stable power supply in the region for customer satisfaction and also to attract industries.

He appealed to the assembly members to help educate electorates not to plant trees directly under ECG networks to safeguard lives and ensure stable power supply in their communities saying, “the tree is a conductor of electricity so in the event of lightning, it could endanger lives and also cause outages since the protection on the ECG network will go off once the tree touches the network.”

Mr. Lumor solicited the support of the Assembly Members to reduce perennial bush fires, which has led to outages and financial loss to the company. He noted that though the company had instituted measures like, “the creation of fire belts around wood poles and replacing of some wood poles with steel tubular poles to safeguard the poles,” there is still the need to sensitise the public on the negative effects of indiscriminate bush fires on operations of the company.

The General Manager, also asked them to corporate with ECG in fixing streetlights, identify and notify the company of fast-developing areas within their electoral areas, pay bills promptly and encourage residents to do same and assist in fighting against illegal connection by reporting culprits. He indicated that, “there’s a six percent commission of any amount we recoup as an incentive for anyone who gives us reliable information to unearth any illegality.”

Municipal Chief Executive for Ketu South, Mr. Elliot Edem Agbenorwu thanked the team for the engagement and urged ECG to continue to build such relationships with the municipality to improve service delivery while calling on members to go and sensitise their electorates to enable the company operate in a harmonious environment.