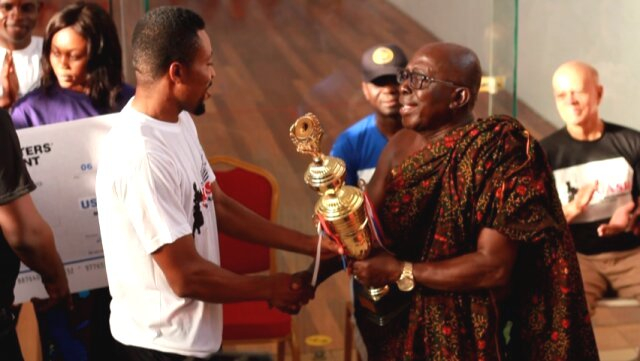 Edem Yao of the Tesano Squash club was over the weekend crowned the winner of the 2019 Movie House National Squash Championship in Kumasi.

He defied stiff opposition from over 50 squashers’  assembled at the 4 Garrison Officers Mess Squash club to win the final match in three straight sets against Maroune Yussif of  Obuasi Squash Club.

Edem had earlier displayed some top quality play from the preliminary stages to the semifinals stage of the tournament, where he encountered two-time champion, Dipson Doodo.

Doodo who could not stand the energised and fresh-blood  Edem, dropped shots only for the latter to take total control for a larger part of the game.

Maroune Yussif, also known as Opeele who made it to the final with ease, however, failed to glitter in the final game losing to Edem 3-0 in the final match.

Maroune Yussif took home Ghâ‚µ500.00 plus a visit to Nigeria. All other participants were presented with cash awards.

”I’m not surprised I won putting into perspective the work I did prior to the competition,”  he said.

A patron of the host club, Nana Yaw Owusu Akwanuansa, was grateful to the sponsors, Movie House, for their consistent support to the sport which is gradually gaining popularity among the youth.