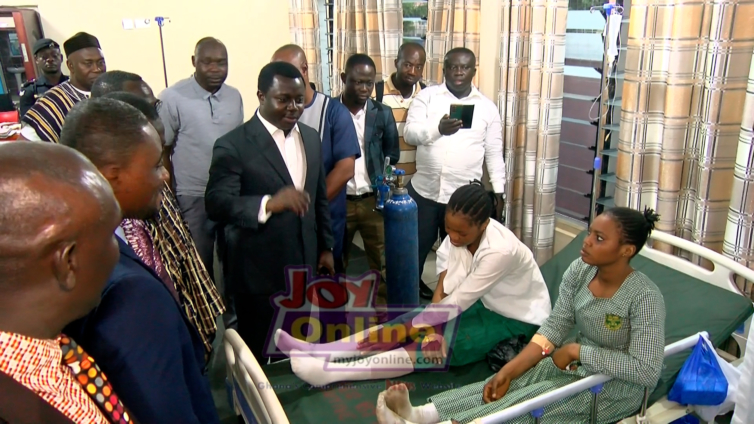 The Ministry of Education has launched investigations into Monday’s chaos on the campus of Islamic Senior High School in Kumasi.

At least 30 students of the school were hospitalised following a clash between irate students and crowd-control police there.

The students were protesting against pedestrian knockdowns involving some students and teachers of the school.

“ Every incident that occurs in every institution under the Ministry and GES, however minor it is, deserve attention; deserves looking into perhaps if there are some lessons going forward.”

“And so on that premise, we are interested to know and to ascertain the facts beyond what we have seen if there are some underlining matters that need to be addressed so that we just don’t gross over the incident here.

Hundreds of parents besieged the school premises in an attempt to see their wards following news of the police-student clash.

But they were left disappointed as the police denied them access.

They raised concerns over the school authority’s handling of the matter and threatened to take action against them.

“We are well aware that you can hit the streets only when you have police approval. You did none of these only for you to lead the students to demonstrate,” an angry parent quizzed.

She continued, “I have 3 kids in this school. They are all asthmatic. Should anything bad happen to them, school authorities and police will regret their actions.”

The Inspector-General of Police, George Akuffo Dampare, who visited the school and some affected students in hospitals, promised to look into the conduct of police officers in detail to maintain law and order in the school.

It comes as police fired warning shots and tear gas into the protesting students who blocked the Abrepo Junction-Barekese Road in protest of the knockdown of students and teachers.

“I also want to assure you that, whatever happened in terms of the policing aspect of it,  we are going to look into it and take all actions that needs to be taken to ensure that at the end of the day, the right thing is done, professionalism is deepened in a manner that will not create a situation that will put anybody at risk.”

“As police, we are here to protect live and property and if we cannot do that then we might have failed in our duties and our mandate.”

According to Dr. Dampare, the Department of Urban Roads  has  assurance to construct speed rumps on that stretch to address students concerns.

Reverend Ntim Fodjuor who led a delegation from the Education Ministry to visit students on admission at Suntreso Government Hospital says the incident at the Islamic Senior High School would be investigated.

“And we are able to deeply and in detail address the matter, it will help ensure that this doesn’t reoccur here and doesn’t show up in other campuses.”

Meanwhile, calm has been restored as agitated parents leave the school.

It is however not clear when normal academic work will resume.