Effective protection, preservation and utilisation of lands and natural resources is our priority – Lands Minister 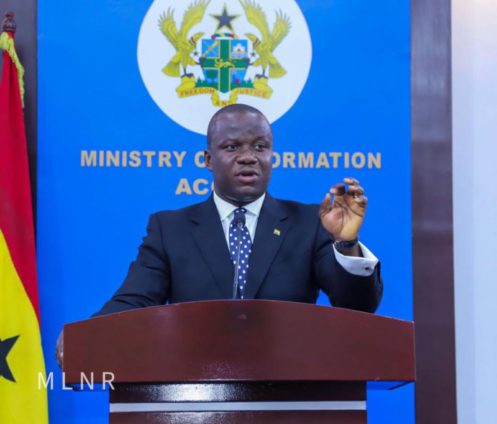 The Minister for Lands and Natural Resources, Samuel A. Jinapor, says Government’s priority is to ensure effective protection, preservation and utilisation of the lands and natural resources of the country.

The Minister was speaking at a press briefing organised by the Ministry of Information on Tuesday, July 20, 2022, to brief the general public on developments in the Ministry of Lands and Natural Resources.

Touching on some of the policies being implemented by the Ministry in the mining sector, Mr. Jinapor said Government has adopted a new local content policy, which has resulted in an increase of goods and services reserved for Ghanaians from 29 to 41. This, he said, will ensure that some US$2,000,000,000.00 which would have otherwise been exported, is retained in Ghana.

On small-scale mining, Mr. Jinapor said Government has adopted a two-pronged approach, that is, law enforcement and reformation, to sanitise the sector. He mentioned some of the innovative policies as the introduction of the mercury-free gold processing equipment, the revamping of the Community Mining Schemes, the tracking of earthmoving and mining equipment, and the procurement of speedboats to patrol river bodies.

He said Government is also committed to diversifying the mineral resource base of the country, particularly lithium and other green minerals, and add value to them to ensure we reap the full benefits of our resources.

In the forestry sector, Mr. Jinapor said Government’s overarching policy is to protect our forest and wildlife resources and also to restore the lost forest cover of the country. Policies such as the Green Ghana Project, the ban on the harvesting and trading in Rosewood, the Forest Investment Programme, the REDD+ Programme and the Cocoa and Forest Initiative are all geared towards this goal.

He also revealed that a Committee will be inaugurated next week to implement a new Green Street Project, aimed at planting trees in the median and avenues of all regional capitals in the country.

In the land sector, the Minister said Government is committed to the digitisation of the records of the Lands Commission to ensure an effective, transparent, responsive and orderly land administration which is steeped in integrity.

This, he said, is being done alongside decentralising the work of the Lands Commission, to ensure efficient service delivery. He added that the Office of the Administrator of Stool Lands has also developed an online application to improve the management of stool and skin lands.

Mr. Jinapor said a Public Lands Protection Team has been constituted at the Ministry to protect public lands from encroachment and recover those that have already been encroached. He warned those in the business of encroaching on public lands to desist from same, as under the new Land Act, 2020 (Act 1036), it is a criminal offence to encroach on public lands.

“We will not hesitate in demolishing unauthorised structures on public lands as we are required to do by law. And where appropriate, we will, in addition to the demolishing, prosecute the encroachers,” the Minister said.

He said Government, through the Ministry of Lands and Natural Resources, will continue to adopt and implement policies and programmes that will ensure that Ghanaians benefit from the lands and natural resources of the country.