Electronics retailers in Ho, Sogakope closed down over fire certificates 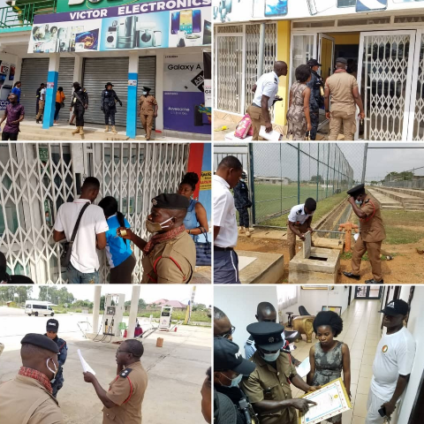 The Fire Service in the Volta Region, on Friday, locked up some major electronic appliance outlets in the Ho and Sogakope townships over fire certificates.

A swoop led by Regional Fire Safety Officer Richard Bisimpo, in collaboration with the Police, closed down branches of retailers including Class House Electronics and Victor Electronics for their inability to produce fire certificates for their premises.

The Officer told the Ghana News Agency (GNA) that the visits were about the fourth attempt at getting the outlets to acquire and to renew the certifications, and that they would remain closed until the required standards are satisfied.

Some filling stations in the South Tongu District were also examined, and on the checklist was also the maintenance and use of electric power systems.

Mr. Bisimpo said electronic appliance retailers were key targets due to the inflammability of their products, and must therefore be kept up to standard in fire prevention and safety.

He stated his concerns over the low level of compliance in the region, and said that the exercise was a “wake up call to all who are aware that the fire certificates are necessary but have not acquired it.”

Mr Bisimpo asked managers and operators to consider the importance of fire certificates, saying it helped ensure adequate preparation against fire outbreaks and other emergency situations.

“Businesses without fire certificates are killing the nation,” he said.

The Officer further advised that emergency assembly points be marked clearly, and said the Fire Service was available to offer training sessions on handling emergencies for staff.

Caution was also given on combustible activities during the dry season, with emphasis on LPG and electrical appliance use.