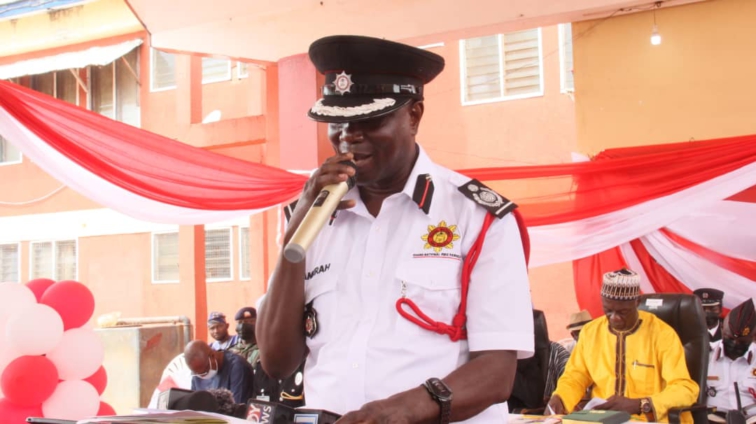 The Northern Region has recorded 167 fire outbreaks in the first quarter of the year as compared to 137 in the same period last year.

The Fire Service says even though the Command had intensified its fire safety educational campaigns, and improved on enforcement of fire safety regulations among others in the area, it still recorded a lot of fire outbreaks in the quarter.

The Northern Regional Assistant Chief Fire Officer (ACFO) James Ankrah who disclosed this at a pull-out ceremony of the Deputy Regional Fire Officer ACFO Orison K.B Dameshie said the service has mapped out some strategic programs to concretize the radical shift in paradigm from firefighting to fire safety, adding that it includes preventive and pre-emptive measures towards addressing the fire menace.

The Northern Regional Fire Officer said the service has drilled boreholes at the Regional Headquarters, the Tamale Metropolitan and the Bimbila Fire Stations through the assistance of stakeholders to address the water challenges the command faces during fire outbreaks.

He added that the Service will strive for all other stations to have such facilities to enhance operational firefighting activities which are usually hampered in the dry season by water scarcity.

ACFO James Ankra said the Fire Service had collaborated with National Signal Bureau to establish an Emergency Command Center at the Tamale Regional Headquarters to facilitate the receipt of emergency calls which will reduce not only the response time to emergencies but the users of the emergency toll free number 112.

He said the Tolon and Saboba areas now have fire stations which will soon be made operational adding that the initiative will help reduce the response time to incidents and bring service to the doorsteps of the people of those districts and their environs.

Mr. Ankra said Management of the Service in the last few months has secured 300 acres of land at Mion for the construction of an ultra-modern Fire Training College.

He said when completed, it will train future Fire Service recruits and cadets, especially from the five regions of the north and will also enhance in-service training activities.

The Regional Minister Shani Alhassan Sayibu in his welcome address said the Northern Region has just five operating Fire Stations in the 16 MMDEs which he said was woefully inadequate.

He said it was, however, heartwarming to know from the command that two more districts now have stations that will soon be operationalized.

He urged the public to be mindful of how they use fire in their homes and wherever they find themselves.

Alhaji Shani also called on the Fire Service to intensify their campaigns to help minimize fire outbreaks. He commended the Ghana Fire Service for their great service to the country.

The outgone Deputy Fire Officer ACFO Orison K.B Dameshie pleaded with the officers to give their support to the new Regional Fire Officer and his team to project the image of the Service through excellent service delivery as enshrined in the Constitution of the Service.

He cautioned the officers that firefighting which includes saving lives can equally be deadly and urged them to constantly train, be courageous, and committed and they will be awarded accordingly.