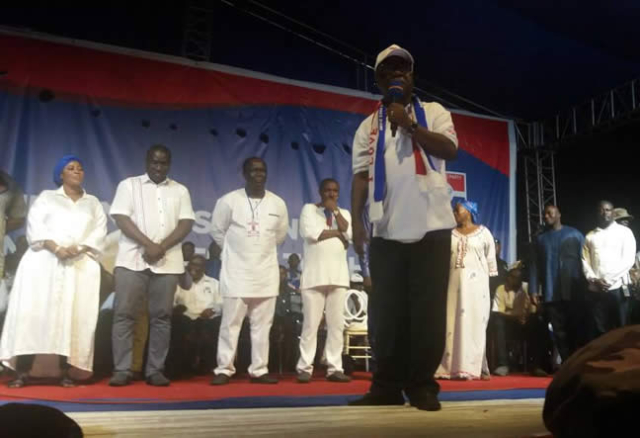 Acting Chair of the New Patriotic Party has been confirmed by delegates to lead the party into the 2020 elections.

In an election duly declared by  Ebenezer Aggrey Fynn, EC Official, Freddie Blay polled 3,021 votes ahead of his closest contender Steven Ntim in a two horse race contest which had Dr Amoako Baah trailing with a paltry 18 votes.

While his loyalty to the party cannot be questioned, Steven Ntim’s capacity to win an election and lead the New Patriotic Party always suffers a jolt and Saturday’s contest was no exception.

On his fourth failed attempt, Ntim polled 2,515 votes, 506 less than the acting chairman, a CPP convert Freddie Blay in a contest built around continuity and change. In the end, continuity won.

The 6,000 delegates were confronted with the challenge of maintaining the men and women who won the 2016 elections or give the chance to a new breed of leadership.

After long hours of voting, counting and declaration, the delegates settled for continuity, by retaining acting Chairman Blay together with his acting General Secretary John Boadu as well as other executives who won the 2016 elections.

“Today is the day the Lord has made,” the delegates chanted with discordant voices of Blay! Blay! shortly before the EC official announced the certified results.

Freddie Blay sat next to the president Nana Akufo-Addo who had returned to the Conference grounds with the two men exchanging smiles and gesturing with the delegates.

The call for continuity was not just for the chairman. It run through the other positions.

He knew he had won and was waiting for the margin. Well, the results came and he was not far from right. John Boadu polled  4,277 votes ahead of his only contender for the General Secretary role Richard Ahiagba who polled 1274 votes.

Sammy Awuku made a smooth transition from the Youth Organiser role to the National Organiser position with a commanding 4,913 votes.

Mr Abankwa in an interview with Gifty Andoh Appiah shortly after the provisional results were declared gave thanks to God for his victory.

He, however, stated that the decision to buy 275 buses for the constituencies is a vision of the acting chair which is yet to receive approval by the national executive committee of the party.

In a contest that had 14 candidates, Abdul Aziz Futa polled 201 votes to win the Nasara Club coordinator. His closest contender was Alhaji Ahmed Nuhu who polled 123 votes.

Aziz Futah is a renowned football enthusiast who noted for his unflinching support for Accra Hearts of Oak football club.

The National Vice Chairmanship position was the most competitive.

Agnes Chigabatia, a consummate politician could only manage 636 votes, not enough to be recognized as a vice chair.

Results at a glance