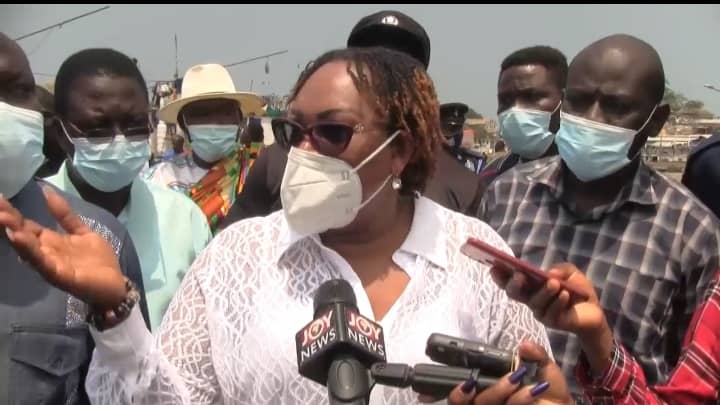 The Fisheries and Aquaculture Minister, Mavis Hawa Koomson says fishermen in Elmina of the Central Region will continue to observe the closed season despite the reopening of the sea for artisanal and inshore fleets.

In an interview with JoyNews after the reopening ceremony at Sekondi Fishing Habour on Saturday, Madam Koomson explained that the decision is to serve as punishment for the fishermen to stop illegal fishing activities.

The Minister further stated that since the fishers refused to accept her campaign against illegal, unreported, and unregulated fishing activities when she visited on Tuesday, June 27, it is important her outfit keeps them in check for some time.

“After my presentation on Tuesday, they said I said, they should stop the Saiko and light fishing which they were not happy with and so I should reverse that statement and I said no. I wasn’t ready and so they said if I am not going to reverse, I should take back the items I brought for them and I did”.

“Now they are begging, they have come to apologize, I am told they had a press conference, one of the chief fishermen is here to apologize but we still have to punish them for that I will not hide it,” she added.

She noted that the fishers will be refused premix fuel and other logistics they need from the government for their fishing expedition for some time until they are willing to comply with the directive of legal fishing.

National Best Fisherman 2019, Joseph Hemans Asmah who represented the fishing community in Elmina appealed to the sector minister to temper justice with mercy.

He explained to JoyNews that those involved are not fishermen but people he described as ‘guru boys.’

“The fishermen were sitting down patiently waiting to hear from the minister but the guru boys they did that so I have to be here and apologize.

DISCLAIMER: The Views, Comments, Opinions, Contributions and Statements made by Readers and Contributors on this platform do not necessarily represent the views or policy of Multimedia Group Limited.
Tags:
Closed Season
Elmina Fishermen
Illegal Fishing
Mavis Hawa Koomson