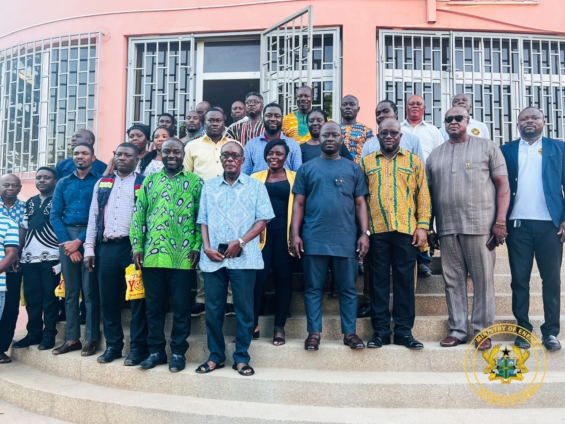 The National Energy Transition Committee took their stakeholder engagement event to the doorstep of fisherfolk at Tema Fishing Harbour on Thursday 2nd June 2022.

Speaking on behalf of Dr. Matthew Opoku Prempeh, the Minister for Energy, Andrew Mercer, Deputy Minister for energy explained to the gathering the reasons necessitating the transition and the need to collect views and inputs from their association to form part of the draft policy by government.

According to him, the relevance of the engagement with the fisherfolk as the main source of fuel used for the fishing operations is carved from fossil energy.

They expressed their gratitude to the committee and the sector Minister for recognising their association as a key stakeholder in the National Energy Transition Commitee agenda as well as extending same to other key stakeholders to solicit opinions for a national transition plan.

The leadership of the association declared their readiness to support government through the transition process by disseminating the message with other fisherfolks across the coast of the nation.

In his closing remarks, the Deputy Energy Minister underscored that the transition is not an event but a progressive plan which is targeted at achieving a net zero future, meaning the amount of carbon produced into the atmosphere should be equal to the amount of carbon taken out.

Mr. Mercer who is also the Member of Parliament for Sekondi, assured the gathering of the Ministry’s gratitude for all the inputs which were made.

The delegation was led by Deputy Ministers for Energy and Transport, Andrew Agyapa Mercer and Frederick Obeng Adom respectively.

The National Energy Transition Committee after this engagement, will proceed with other key stakeholders such as the civil society organisations, diplomatic communities, amongst others.