Engage in introspection to prevent future brawls – Otumfuo to executive and legislature - MyJoyOnline.com 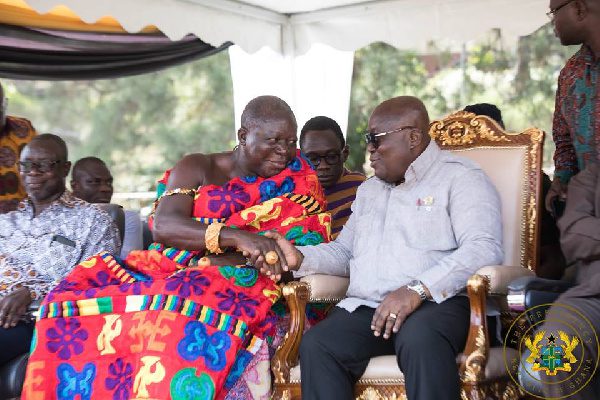 The Asantehene, Otumfuo Osei Tutu II, has called on the legislature and executive to engage in introspection to prevent future brawls at Parliament.

The King concerns follow the chaos that characterized the debate on government’s proposal to introduce an electronic transaction levy (E-levy) in December 2021.

According to the Asantehene, the brawl the MPs engaged in was unexpected, thus, asked government and the legislature to dialogue more to avert such incidences in the future.

Otumfuo Osei Tutu II was addressing the launch of the first-ever media capacity enhancement training for 250 journalists in Kumasi.

“The comment of work on the eighth Parliament of the Fourth Republic have not been in the most edifying tradition, but no one could have expected that the year will conclude with an honourable House degenerated into a brawl with very honourable members putting aside their debating skills to exhibit their punching prowess.

“Recognising this makes it necessary for us to take a good look at ourselves and the path we have embarked upon. So, naturally, the focus of such introspection shall be highest on our political leaders who after all occupy what political scientists consider the first and second estate of the realm,” he said on Monday.

Since Finance Minister, Ken Ofori-Atta, announced the 1.75% levy on all electronic transactions effective January 1, 2022, the country has been divided on accepting the policy.

Whilst some see it as an innovative means to generate revenue post-Covid-19, a section of Ghanaians, including the Minority in Parliament and some economists, have kicked against this proposal, arguing that it will intensify the hardships of the average Ghanaian.