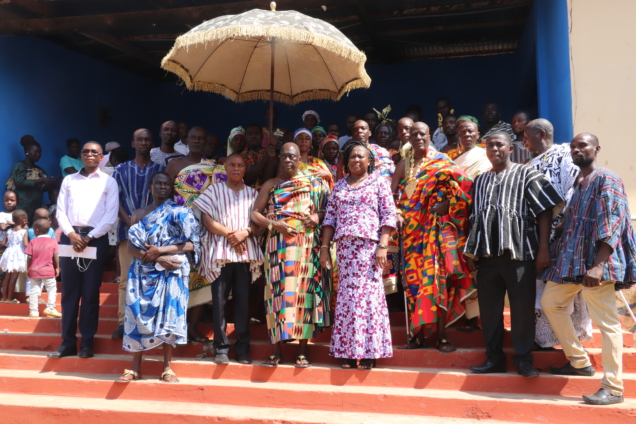 Nkonya Wurupong Traditional Council lost its council status after the overthrow of Ghana’s first president, Dr. Kwame Nkrumah in 1966. Just after that, several attempts were made to regain their area council status and with years of litigation, the area regained its status but without a council.

The District Chief Executive (DCE) for the Biakoye District, Millicent Kabuki Carboo, who graced the occasion has charged the newly inaugurated traditional council of Wurupong to ensure peace and fair traditional jurisprudence in the area.

According to her, there cannot be peace without justice hence the need to ensure proper traditional jurisprudence.

“There has always been the notion that we need peace, but there cannot be peace without justice, so Nananom are to ensure anytime complaints come before them, they investigate and make sure that whoever needs to be penalised is penalised according to the wrongs done and not by giving any kind of judgement. It does not add to the peace of the people.”

She also called on the Council to help the assembly generate revenue for developmental projects in the area.

The DCE said revenues generated do not remain at the assembly level by a component is brought back to the community for development.

“Taxes paid to the assembly does not remain at the assembly, part of it is brought back to the society for developmental agendas. For a long, while now, Wurupong traditional area was not inaugurated hence they could not pay anything here but from today, just as I have promised them, I will make sure they have the needed logistics to ensure that they are able to do their work.”

She has again urged residents in the district to consider paying their taxes regularly and promptly since that is the source of development.

“We derive our internally generated fund (IGF) through taxation of businesses but most of the people do not actually want to pay. They give all kinds of excuses why they cannot pay. I want to urge all those who own businesses in the whole of Biakoye that they pay their taxes and pay them timely.”

She said the ceremony should be seen as uniting the people for development and also assured the council of the Ministry’s commitment to development.

“This inauguration should be seen to integrate the people of this traditional area, especially our revered chiefs, to work hand-in-hand for endless development but not to disintegrate you. We should be able to see progress and unity among you the next time we visit this council.

“On our part, the ministry for Chieftaincy and Religious Affairs, we will ensure the posting of staff, either on temporal or permanent basis to help with administration and also assist you with some logistics. Your council will also benefit from a series of training engagements lined up in our ministry’s activities and programmes earmarked for next year, 2023.”

DISCLAIMER: The Views, Comments, Opinions, Contributions and Statements made by Readers and Contributors on this platform do not necessarily represent the views or policy of Multimedia Group Limited.
Tags:
DCE
Nkonya Traditional Council
Peace