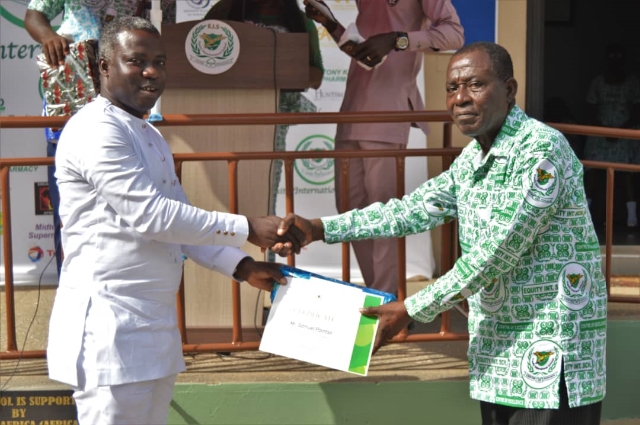 Equity International school has held its 6th anniversary and graduation ceremony over the weekend at Suhum in the Eastern Region on the theme “Education for all: A major key to promoting the National Agenda of Ghana Beyond Aid.”

Director of Equity International School, Richard Afasi, said the school’s mission is to nurture individuals to become world-class citizens who have the passion to explore and understand the world around them through transformative education.

He said the school’s vision is to produce a top breed of citizens with a passion to serve their communities.

He noted that the school was established in 2013 by Daniel Kwame Afasi of blessed memory with an enrollment of 54 pupils but through hard work and dedication, it can now boost of 474 pupils from Nursery to JHS 3.

Recounting some of the achievements of the school, he revealed that the school scored 100 per cent passes in the 2019  Basic Education Certificate Examination (BECE) with distinctions and majority of the students gained admission in their first choice schools at the second cycle institutions.

He said before the celebration, the school partnered with Engage Now Africa (ENA), Forever Young Foundation and other benevolent organisations and individuals and donated some items to some selected public and private institutions in the Suhum municipality to aid their work.

The Institutions that benefited include, Suhum Magistrate Court which received 20 bags of cement and one trip of sand; Suhum Police Station which received one industrial photocopier machine and reflective jackets to the MTTD. Rev Bidi’s Clinic and Choco Herbal Clinic also received a number of bedsheets. Other institutions include Suhum Children’s Hospital, Providence Medical Center and Suhum Government Hospital.

He has pleaded with the Suhum Municipal Assembly to come to their aid to find a lasting solution to the problem.

Mrs Esther Quaye-Sowah, The Suhum Municipal Director of Education, who was the Guest Speaker for the event urged parents, teachers, pupils and other stakeholders to perform their respective roles diligently to promote quality education in Ghana.

Mrs Quaye-Sowah commended the school authorities for working tirelessly around the clock to bring the school to the level in which it is now saying the school is one of the best in the municipality.

Director of Special Projects at Engage Now Africa (ENA), Afasi Komla, recounted some of the assistance ENA has given to some institutions, recalling that the NGO partnered with Forever Young Foundation to raise GHS50, 000 and donated to some institutions in need.

He said the donation was ENA’s Corporate Social Responsibility to give back to society and urged individuals to also give their widow’s mite to support the government.

DISCLAIMER: The Views, Comments, Opinions, Contributions and Statements made by Readers and Contributors on this platform do not necessarily represent the views or policy of Multimedia Group Limited.
Tags:
Equity International School
Ghana Beyond Aid