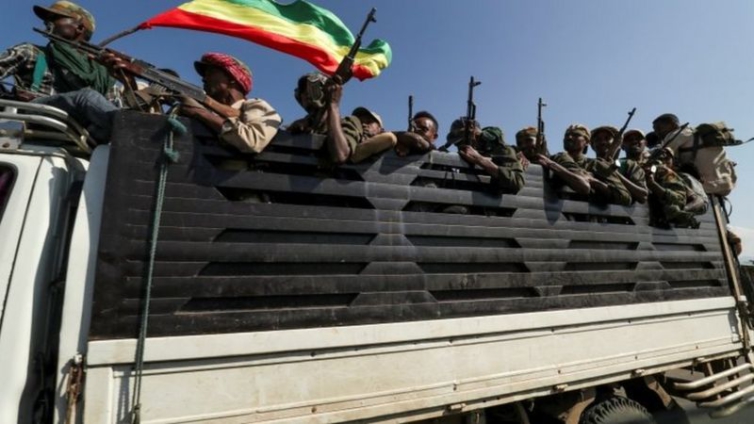 Ethiopia’s prime minister has accused forces in the northern Tigray region of carrying out a massacre of civilians.

Abiy Ahmed said Ethiopian federal troops had “liberated” the western part of Tigray in “a victory for the innocent civilians of Mai-Kadra that were brutally massacred”.

In a separate statement, Mr Abiy also said “bodies of members of the army, who were shot while their hands and legs were tied”, had been found.

Fighting between government forces and the TPLF broke out last week.

Getting information is hard, with phone lines and the internet down.

This would be the first large-scale killing of civilians in the conflict.

There has been long-standing tension between Ethiopia’s government and the TPLF, which controls Tigray, the country’s northernmost state, and it has boiled over into military clashes, including air strikes by federal forces.

As a result, thousands of civilians have crossed the border into Sudan, which says it will shelter them in a refugee camp.

Who were the victims?

Amnesty said the killings happened on the night of 9 November.

The human rights group said it had confirmed that “scores, and likely hundreds, of people were stabbed or hacked to death in Mai-Kadra (May Cadera) town in the South West Zone of Ethiopia’s Tigray region”.

It had seen and “digitally verified gruesome photographs and videos of bodies strewn across the town or being carried away on stretchers”.

Amnesty said the victims appeared to be labourers not involved in the conflict. It is not clear where they came from.

It said witnesses had spoken of wounds “inflicted by sharp weapons such as knives and machetes”. Some witnesses said the attacks were carried out by forces loyal to the TPLF after they had been defeated by federal troops in an area called Lugdi.

Ethiopia’s prime minister said his forces had liberated an area that had been subject to “gruesome and fatal attacks” at the hands of TPLF.

“Committing crimes and injustice is very normal for the greedy junta,” Mr Abiy said in a Facebook statement.

Referring to army soldiers he said were shot when their hands and legs were tied, he added, “the cruelty was heartbreaking”.

Mr Abiy’s government later announced it had appointed an interim administrator for the province as part of its efforts to oust the regional leadership.

The UN has said that vital aid supplies to hundreds of thousands of people in northern Ethiopia are at risk because of the conflict there.

What is the background?

The prime minister ordered government forces to engage forces loyal to the TPLF on 4 November after he said military camps had been attacked.

There have been a number of clashes and air strikes since. Mr Abiy said government forces had made major gains.

The TPLF was the most powerful member of Ethiopia’s ruling coalition for many years, but Mr Abiy curbed its influence after coming to power in 2018 and the TPLF refused to join a unified party.

Tigrayan leaders say they have been unfairly targeted by purges and allegations of corruption.

Mr Abiy accuses some TPLF leaders of being “fugitives from justice” and opposing his moves to reform the way Ethiopia is run.