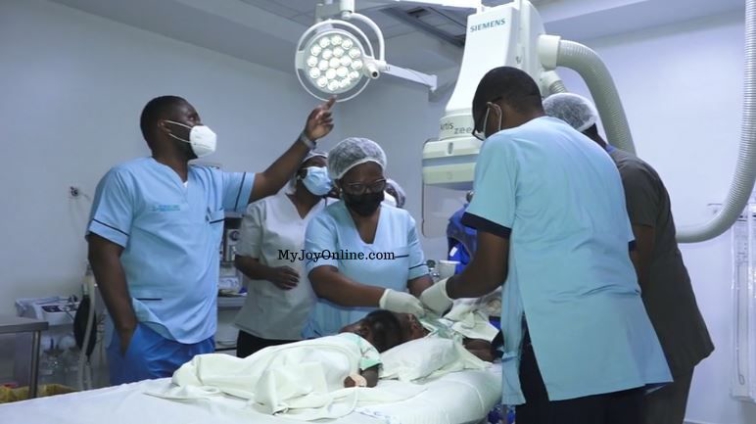 Euracare Advanced Diagnostics and Heart Centre, as part of its Corporate Social Responsibility, is set to provide free scans to the Siamese twins conjoined at the top of their head.

The Operational Manager of the facility, Nadia Bekoe, said the gesture is to show support to the babies and their parent, adding that the situation is unfortunate but not unsurmountable.

“Euracare, as part of its CSR, is very happy to do this procedure at no cost to the family. This is our contribution towards the welfare of the family, to our community and also to serve as capacity building within the healthcare industry in Ghana.”

As part of preparing for a life-saving separation surgery for the twin babies, the facility, on June 4, carried out a crucial scar scan, the first out of the several scans the twins will be subjected to in the next 12 to 18 months for the separation.

The success of this operation will make history as this is the first attempt to separate conjoined babies at the head in the country.

Nadia Bekoe said pledging the facility’s support noted the difficulty the twins would undergo growing up and commended the doctors for their commitment.

“The boldness of the doctors to separate them is something we applaud and we will always support.”

Speaking to JoyNews, a consultant radiologist, Dr Benjamin Dabo Sarkodie, said the scans are very vital as they will help the doctors understand, among others, the blood flow to the twins before the separation.

“These kids are quite unfortunate that they will be sharing very vital organs, especially the head, the brain. In other to be able to separate them through surgery, we need to understand the blood flow of both twins.

“We need to understand if there are any connections so that we know which ones we can preserve and which one we can sacrifice, so that is the idea of doing all of this,” he told JoyNews’ Kojo Yankson.

According to another consultant, a Neurosurgical and head of the twin surgical team, Dr Samuel Kaba Akoriyea, “Today’s procedure is one of the most important procedures for the accurate surgical planning for the surgery and to really understand how the anatomy of the conjoined twins is, the level and the grade at which we need to work.”

It took 13 medical staff including four anesthesiologists to transport the babies and administer the scans.

“This is a huge teamwork; we have about 30 doctors, all consultants and senior specialist working day and night on this reading,” Dr Kaba Akoriyea said.

“Today alone, we had to deploy about 13 of them, about four anesthesiologists to be able to put them to sleep, two for each baby.”

About six radiologists had to look on, compare and share notes with about three neurosurgeon to ensure everything is on point.

Dr Akoriyea also observed that “resource-wise, it’s quite demanding but every one of them is happy to be part of it.”

He expressed appreciation to Euracare Advanced Diagnostics and Heart Centre for offloading the cost off the shoulders of the parent.

A Medical Doctor at the Accra Ridge Hospital, Dr Maurice Gorleku noted the potential difficulties the team may face will be transporting the twins to and from the diagnostics Centre, especially with facilities without lift.

“Because the twins are conjoined, at any point in time, they need to be moved via a stretcher so we have to enroll the services of the National Ambulance Service.

“We have to enroll the assistance of various nurses and other doctors to help move them from Ridge facility to Euracare so they were put on a stretcher, and then we had to specially strap them in place.”