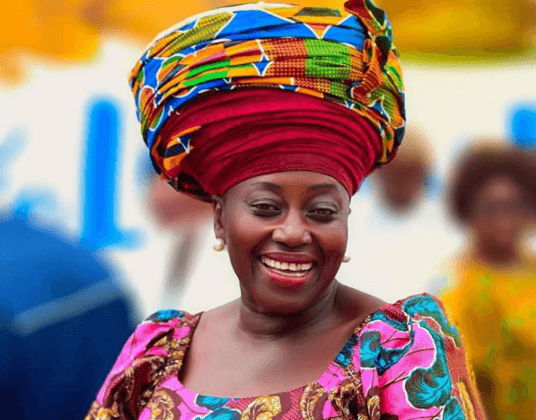 Speaking with Becky on EVIBES, she said there was a time she was unidentifiable without her headgear, hence her continuation of that style of headgear.

“I have realised that it’s the headgear that people recognise, not my dressing, not my show. Not even my beads.

“I said wow and said to myself, if you miss the face, don’t miss the headgear. The headgear is actually, what people see me out with.

The broadcaster also narrated how she was pushed and insulted by people because she was not wearing her headgear which people identify her with.

“I tried not wearing the headgear and it was terrible, I told myself I was not going to go out without this headgear. This was because some time ago, I tried going out without it and I was insulted.

“People could not even make me out. They were surprised when I asked them whether they make me out. But when I spoke they asked me if I was Akumaa, I said no but they recognised me and apologised,” she narrated.

The celebrated broadcaster also advised people not to only show respect to people based on their appearances but by their character.