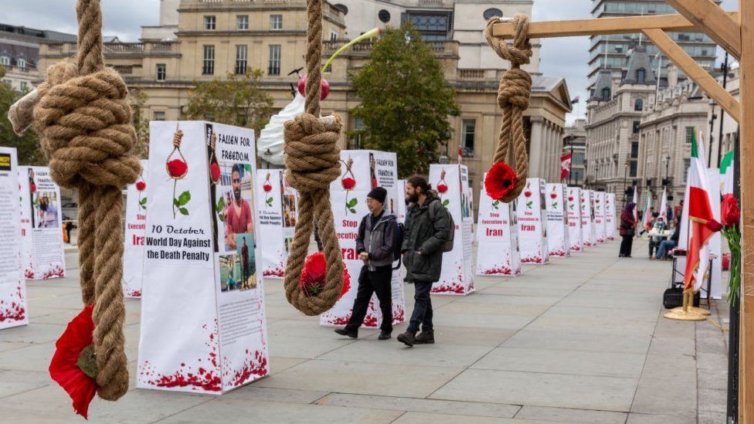 According to the Iran Human Rights Group they were among 32 people executed in the past week alone.

A former child bride, convicted of later killing the man she had married at the age of 15, was among them.

Authorities are believed to have substantially stepped up their use of the death penalty, executing twice as many people so far this year than last.

Rights groups report that Iran also executes more women than any other country, the majority of whom are thought to have been found guilty of killing their husbands.

On Wednesday, the Iran Human Rights Group says former child bride Soheila Abadi was hanged in prison after being convicted of killing her husband after marrying him 10 years previously when she was 15 years old.

The sentencing court reportedly said the motive for the murder had been “family disputes.”

Two other women executed on Wednesday had also been convicted of murdering their husbands, the group said.

Activists say many of the cases involve accusations of domestic violence but that Iranian courts frequently do not take that into account.

Precise figures on execution numbers are not available as Iranian authorities do not officially announce every case where the death penalty has been carried out.

According to a research published in April by two rights groups, only 16.5% of executions believed to have been carried out in Iran last year were announced by officials.

Reports this year suggest the use of the death penalty has spiked even further since.

Human rights group Amnesty International this week accused Iran of having embarked upon a “horrific” execution spree in recent months, reportedly putting more than 250 people to death in the first six months of 2022 – more than double the number executed over the equivalent period in the previous year.

“The state machinery is carrying out killings on a mass scale across the country in an abhorrent assault on the right to life,” said Diana Eltahawy, deputy regional director at Amnesty International.

Some of those convicted have been put to death in mass executions, the rights group reports, including a dozen people in one prison on 15 June and the same number in a separate prison on 6 June.

Ethnic minorities are also overrepresented in the statistics.

Despite making up around 5% of Iran’s general population, members of the Baluchi minority made up more than one in four of those believed by Amnesty International to have been executed so far this year.

DISCLAIMER: The Views, Comments, Opinions, Contributions and Statements made by Readers and Contributors on this platform do not necessarily represent the views or policy of Multimedia Group Limited.
Tags:
Execution
Iran