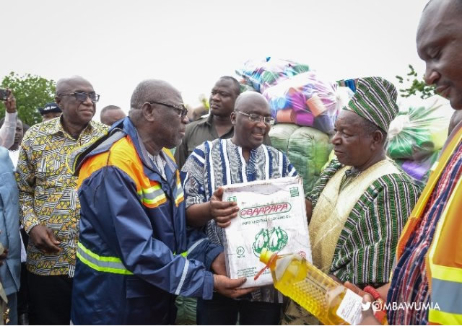 His comments come after it was discovered that expired food items had been presented by the vice president to scores of residents affected by floods following the spillage of the Bagre Dam in the Wa Municipality.

The food items, cooking oil and rice were distributed to the flood victims over the weekend by Dr Bawumia during his visit to the region.

A reporter from Graphiconline, who first broke the story, said the vegetable cooking oils, for instance, had a September 01, 2018 expiry date.

Joy News’ Rafiq Salam has visited some of the recipients of the donation and reports that some of the cooking oils he sighted had August 28, 2018 as expiry dates.

One of the cooking oils captured with September 01, 2018 expiry date

Rafiq also spoke to a family who had fallen ill after some of the cooking oil and rice were used in the preparation of a meal.

Adam Abubakari said he had a running stomach and his children were hospitalized.

It was confirmed at the hospital that the cause of their illness was the meal they had, Abubakari told Rafiq.

But Mr Yieleh Chireh said the expired items were deliberately included in the items donated by the vice president to create disaffection for him.

“For me I believe people want to sabotage the vice president in case there is room for him to become president.”

Mr Chireh who is also ranking member on Parliament’s Health Committee was unable to name any NPP member he suspects included the items but is certain that could not have been anyone from his party, the NDC.

He said the incident is unfortunate, “but it appears they want to put him [Bawumia] in a very bad media light.”

He wants the incident thoroughly investigated and the culprits punished for bringing such disgrace on the vice president.

“What needs to be clear is that anytime a high profile person is involved in a thing like this, you must make sure that whatever he is donating is proper and good.

“So could it be a mistake, nobody can tell but that is why things must be investigated,” he added.

According to NADMO’s Communications Director, George Kwadwo Ayisi, the expired items which were isolated in their Warehouse in Wa, were accidentally loaded onto the truck and ended up in the homes of flood victims.

NADMO says it has begun investigations into the issue.