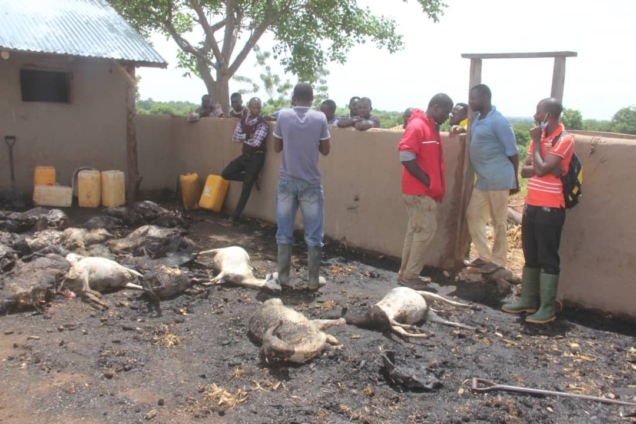 A farmer in Kusanaba near Bawku West district in the Upper East Region has lost 36 sheep and several guinea fowls, among others, to fire.

John Aminda suspects his farmhouse was deliberately set on fire for a reason best known to the perpetrators.
The incident which happened on Tuesday night left John devastated and speechless.

“I couldn’t believe what I saw on my farm,” he said.

John says there were no fire activities around the farm before the incident happened.

“It beats my imagination,” he added.

John worked for many years to raise the animals, but, unfortunately, it took a day for someone to destroy everything.
He doesn’t know where and how to start life again.

John recounts how he was attacked on his farm one night by some criminals. He reported the case to the Binaba police for investigation.

The killing of the animals came as a surprise to many residents as some of them gathered to watch the animals’ lifeless bodies.

They express disappointment and promise to help find the perpetrators of the act.

John Akumbole, for instance, is calling on community members to report suspected criminals to the appropriate authorities to deal with them.

Sub-chief of the community, Komisah Ndeogo, believes the gods of land will punish the perpetrators of the act.

The police command has since visited the scene and assured residents to remain calm as they commence the investigation.

NADMO and the Agricultural Department of the Bawku West District were also present to collect data on the incident.

DISCLAIMER: The Views, Comments, Opinions, Contributions and Statements made by Readers and Contributors on this platform do not necessarily represent the views or policy of Multimedia Group Limited.
Tags:
Bawku West
Farmer
Fire
Sheep