Fashion at NPP National Delegates Conference; who wore what? - MyJoyOnline.com

Fashion at NPP National Delegates Conference; who wore what? 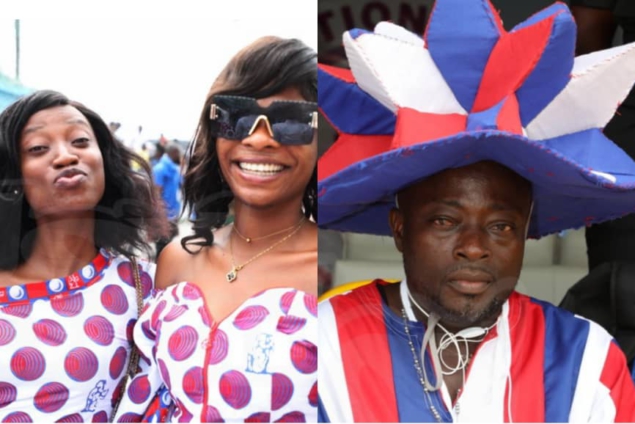 Traveling from various corners of the country, the enthusiastic supporters had one objective in mind. Their goal was to elect a new crop of executives to man the affairs of the party for the next four years.

However, the seriousness of this activity did not take away the fashion sense of the teeming party loyalists.

Even though they understood the stakes were high, it did not lower their fashion temperatures.

As a result, the party enthusiasts were spotted in bright outfits which showcased the resplendent blue, red and white colours of the New Patriotic Party.

One of such attires that dominated the grounds was plain white shirts with NPP-branded muffler scarfs.

Those who wore this outfit were mainly the ‘elderly generation’ of the party, or if you like, the ‘fatherly figures’ in the elephant family.

A classical example in this regard was the chairman of the party’s National Election Committee, Mr Peter Mac Manu.

Having served as the party’s chairman from 2005 to 2010, he demonstrated his love for the party through a neatly ironed shirt adorned with a colourful party-branded muffler hanging on his neck.

That same neck that shouldered the responsibility of ensuring a smooth election.

Dr. Bawawia dressed similarly- plain white shirt with a tinge of red and blue on the breast pocket.

‘Alan Cash’ as he is popularly called, clothed his huge frame with a spotless white shirt with a shade of the party colours over a black pair of trousers.

The President himself, Nana Addo Dankwa Akufo-Addo also joined the ‘white fraternity’ with his white shirt which had the iconic emblem of the party on the left, with the initials of the party, boldly imprinted on the right side of his shirt.

Of course, as President, he also tagged along a brooch of the coat of arms, representing the high office he represents.

Another beautiful spectacle that did not go unnoticed was the elegant ladies in the party who came to the show in their beautifully sewn kaba clothes, dotted with NPP colours.

They, like other excited delegates, posed for the cameras in their specially designed outfits. The outfits came in different styles though.

Obviously, even though they support the same political tradition, it was clear that they preferred different seamstresses to work on their fabrics. Their smiles underscored their joy!

Let’s now turn our attention to another outfit, which was on mass display – batakri!

Batakari is a traditional garment that is common to locals from the Northern parts of Ghana. It is usually worn for customary functions and is often accorded a lot of significance, where leadership is concerned.

Perhaps because of its association with power and prominence, it was no surprise that many of the perceived ‘power brokers’ in the NPP chose to wear that for the party’s 2022 National Delegates Conference.

A notable individual who was spotted in one of such NPP-branded batakaris is the newly elected National Organiser of the NPP, Henry Nana Boakye, popularly known as ‘Nana B’.

Spotted in a white batakari with patches of red and blue, he came off as a good representation of the rest of the other gallant gentlemen in the party who showed up in colourful smocks.

In the photo above, Nana B is seen in a handshake with President Akufo-Addo. Nana Showboy, chose his characteristic white shirt with NPP flag on the chest over dark blue trouser.

Apart from these mentions, there were so many other exciting fashion spectacles which graced the Accra Sports Stadium.

Here is where we leave you to feed your eyes, all by yourself.