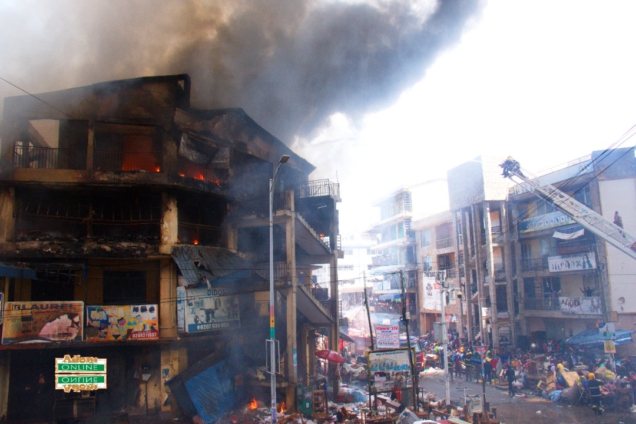 The seven-member committee set up by the Accra Metropolitan Assembly (AMA) to probe the Makola fire outbreak has released its findings on the disaster that brought down the three storey building located at Okaishie – Makola.

In the report sighted by Myjoyonline, Chairman of the Committee, Metro NADMO Director, Henry Plange noted that the committee was unable to find the cause of the fire outbreak, however, interactions with the affected traders and Electricity Company of Ghana (ECG) revealed some possible causes.

According to the 39-paged report, “there was a consensus by the traders that the fire outbreak emanated from the connection of a generator and electricity.”

However, checks from the Control Room of the Electricity Company of Ghana and their Fault Office records could not confirm the power outages.

Therefore, the engineers of Electricity Company of Ghana could only suggest the possible causes of the fire outbreak since it was not clear exactly how it really started.

The committee listed a faulty generator, a fuel leakage from the generator, a faulty or sub-standard change-over switch as possible causes of the fire outbreak.

Adding that “human error, this meant that the operator had forgotten to engage the change-over to match the incoming supply” and “the use of manual or an improvised change-over switch, which sometimes involve the removal of fuses to prevent ECG’s mains from feeding back to the generator set was not operated properly” could have triggered the fire outbreak.

Although the committee reported no injuries or deaths, it stated that out of the 122 shops in the building, 84 shops had their wares completely burnt.

The Committee observed that “even though Electricity Company of Ghana reported that there was no power outage in the national grid at the Makola area, the traders both in the burnt building and outside reported three (3) different outages in the earlier hours of the incident day.”

As to how the fire was doused, the report explained that “a total of eleven (11) fire appliances made up of nine (9) tenders and two (2) turntable ladders respectively were used to extinguish the fire. The operation was executed by a team of Ghana National Fire Service (GNFS) personnel, Ghana Army, the Prison Service which also supplied water.

“Officers from the NADMO headquarters and the Greater Accra Regional Operations unit were also in attendance to help douse the fire. They used their specialized tools to break in locked shops which enabled the firefighters to have access. They used their site lights to illuminate the scene at night for smooth operations. Earlier, officers of the Electricity Company of Ghana were called in to disconnect the power supply within the building and general power supply in the Makola enclave.”

Meanwhile, the committee after its assessment is recommending the demolishing of the existing Makola market for reconstruction “since its current state is a risk to those who would like to occupy it and to the general public who may have to do business there.”

As part of its nine recommendations, the committee is recommending an “assessment on the financial loss to the affected traders in the building should be further assessed through a well-structured investment program to ascertain the exact loss so that Central Government could assist the victims by providing both financial and non-financial program to ameliorate their economic conditions.”

On Monday, July 5, a fire outbreak at the Makola Market caused distress in the country as it took personnel from the Ghana National Fire Service about four days to completely douse the flame due to the combustibility of the goods in some shops.

This necessitated the Accra Metropolitan Assembly (AMA) to commission a seven-member committee to investigate circumstances leading to the fire.