Fire destroys shops at Makola as Fire officers battle to douse it - MyJoyOnline.com 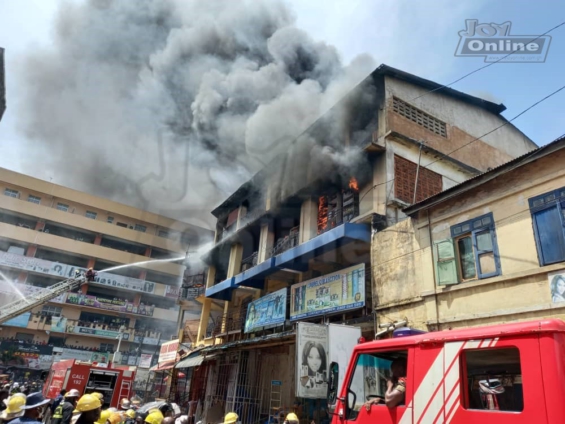 Officers of the Ghana National Fire Service (GNFS) are battling an inferno at Makola market, which is destroying a three-storey building and valuables running into millions of Ghana cedis.

So far, the affected building is opposite the Makola Mall in the central business district.

The inferno is reported to have started around 9 am on Monday on the last floor of the three-storey building.

According to witnesses, when the fire started, they called on the fire service station that is situated a few meters away but they claimed “they do not have water” to douse the flames.

The fire then spread to the other floors destroying properties as traders and other spectators looked on.

Reinforcement was deployed to the scene when the fire escalated.

According to JoyNews’ Manuel Koranteng, eight fire tenders and a turntable ladder are currently being used by the personnel to quench the flame.

He added that due to the combustibility of some of the goods that are in some shops, the fire reignites when all seems to be under control.

Although no casualty was recorded, traders who have lost goods to the tune of millions of Ghana cedis are bearing the brunt of the inferno which started as just a spark of fire.

Speaking to JoyNews, a cosmetic seller accused the fire service of failing to meet their mandate, thereby, causing their loss.

The Mayor of Accra, Mohammed Adjei Sowah and some representatives from the Metropolitan Assembly also visited the scene to assess firsthand the severity of the inferno.

In an interview, Mr Sowah said the fire service could not respond to the initial calls of the traders due to inaccessibility to water.

According to him, although the Tudu fire service station has water hydrant getting water for the equipment is the issue.

“The GFS is fighting the fire to the best of their ability; however, information on reaching me is that access to water has been the problem.

“Therefore, at this moment, I want us to focus on fighting the fire, and then when we are done, we can assess the situation and give a proper report on what has transpired. “We have water hydrant but we don’t have enough water and that is the problem,” he stated.