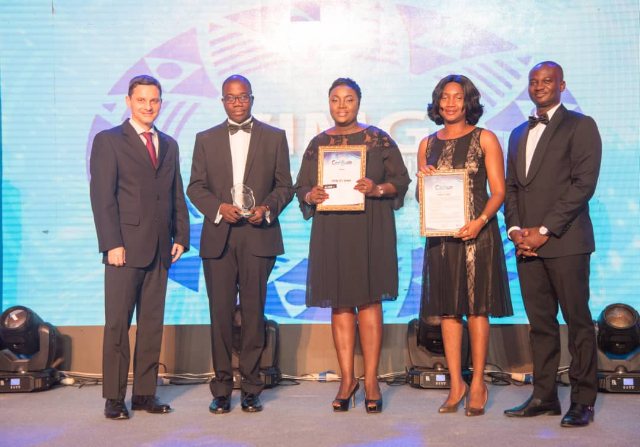 Fidelity Bank, the largest privately owned Ghanaian bank in the country has for the second time been adjudged the best bank in the industry for the year 2017 at the Chartered Institute of Marketing Ghana (CIMG) Awards.

Commenting on the award, Julian Opuni, Deputy Managing Director of Fidelity Bank, said, “It is a privilege for Fidelity Bank to win in such a respected and competitive category of the CIMG Awards.”

“This is evidence that Fidelity Bank is indeed committed to its vision of providing world class services to our customers. The loyalty of our cherished customers and the dedication of our professional staff earned us this award,” he added.

Mr Opuni dedicated the CIMG Bank of the Year award to all the bank’s customers, employees, and stakeholders for believing in them and moving them from strength to strength.

He promised that Fidelity Bank will leverage on their core expertise and will continue to deliver convenience through technology and innovation.

In the year under review, Fidelity Bank were co-managers of the country’s 10 year and seven-year ESLA Bond mandated to raise ¢10 billion to refinance the energy sector debts.

Earlier this year, the groundbreaking transaction won the award as the Best Restructuring Transaction in the whole of Europe, Middle East and Africa.

It sets a precedent as the largest local currency corporate bond issue in Sub Sahara Africa and truly creates a new asset class out of the region.

The Bank also undertook several marketing initiatives to create more convenience and rewards for their customers.

These included the 10x Richer promo, the Fidelity Mobile App and Fidelity Y’ello save account. Fidelity Bank, in addition, continues to support the communities in which it operates through various CSR projects.