Filth in water bodies costing us too much money in treatment for use - Water Company Limited - MyJoyOnline.com 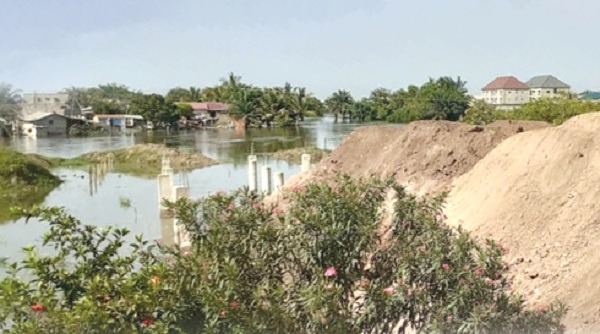 The Ghana Water Company Limited is worried that is it spending so much money to treat water for use. The company is also worried about the constant maintenance it has to do on its treatment plants.

This cause of worry is due to the filth which has engulfed the country’s water bodies. The Company is optimistic the situation will change but only if illegal activities on water bodies stop.

Director of public relations at the Ghana Water Company Ltd. Stanley Martey has been telling Host of Super Morning Show Kojo Yankson ‘every river body which we abstract for treatment in Ghana is currently heavily polluted either by galamsey, sand winning activities, industrial waste, and aqua culture’

The Company says its treatment plant is some areas are being overly stretched in its bid to treat the polluted water for use.

The company’s treatment plant on the Black Volta in the Upper West is polluted by galamsey. So is its plant at the Tano river at Bono.

The same situation can be said of Treatment plant at Sekyere-Heman on the Pra in the central region. The Nawuni river in the northern river is however polluted by sand winning.

When this happens, the treatment plants, which are both manual and automatic are forced to shut down because the levels of dirt (turbidity) is way beyond what it can handle. Another thing the Company does is, it forces to pump the water for treatment resulting in the dirt being stuck in the pumps.

This obviously means the pumps must be treated and that obviously results in no treated water for people there. ‘What happens is that instead of our pumps extracting water, it ends up extracting stones and sand particles so it becomes very difficult for the pumps even to work, meaning we have to always service them weekly’

In situations where the pumps even allow for the water to be extracted, Mr. Martey tells Kojo Yanson ‘it becomes so expensive because we have to use so much chemicals that you wonder if that is the right thing to do’

Whiles intensifying education to help stop activities endangering these polluted water bodies, the company is also having to keep watch over the only river body they say is not heavily polluted for now – The Volta River.

The policing according to Mr. Martey is becoming difficult as water farming becomes rampant on the River.

‘The situation is changing the color of the water so at the Kpong treatment plant for instance, we were not using lots of chemical but now we are having to do so to meet the approved standards by WHO and Ghana standards authority.’

But isn’t the use of the extra chemicals posing a risk to customers? Mr. Martey doesn’t think so ‘our chemicals are such that when we treat the water and we get to the standards that is okay for consumption then it’s not dangerous but then why do we keep putting n more chemicals?’

The Water Company wishes however that the period where the Operation Vanguard was operating would be brought back as that saw an improvement in the water turbidity.

During that time, Mr. Martey says less chemicals were used for treatment then and it was less costly as well as less pressure on its treatment plants. ‘We are just managing the situation because any thing can happen at any time.