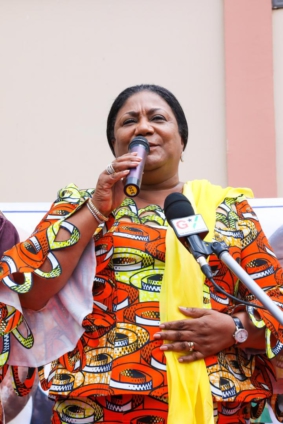 The New Patriotic Party’s (NPP) parliamentary candidate for Ningo-Prampram, Mr. Alex Martey, has expressed gratitude to the First Lady Rebecca Akufo-Addo for donating a vehicle to aid his campaign.

Mr. Martey, a first-time contender told the Ghana News Agency that the Mahindra Maxitruck came at the right time as campaigning was becoming intense with the December 7 general election drawing closer.

He noted that the donation formed part of the many promises the First Lady, who happens to be a native of the constituency, has fulfilled towards his bid to deliver the Ningo-Prampram seat to the NPP.

He gave the assurance that the car would be put to good use especially for the campaign activities of the Ningo-Prampram Chapter of Loyalty Ladies.

The NPP Parliamentary Candidate pledged that he would deliver a resounding victory to the party to glorify the First Lady for her gesture and support.

The keys and documents of the vehicle were handed over to Mr. Martey by Mr. Alfred Boye, former Greater Accra Regional NPP Chairman, on behalf of the First Lady.

In another development, the candidate together with a huge following of supporters on Sunday embarked on a campaign walk from Mataheko to Afienya.