FixTheCountry: Campaigners must be clear on what they want government to fix – Dr Asah-Asante 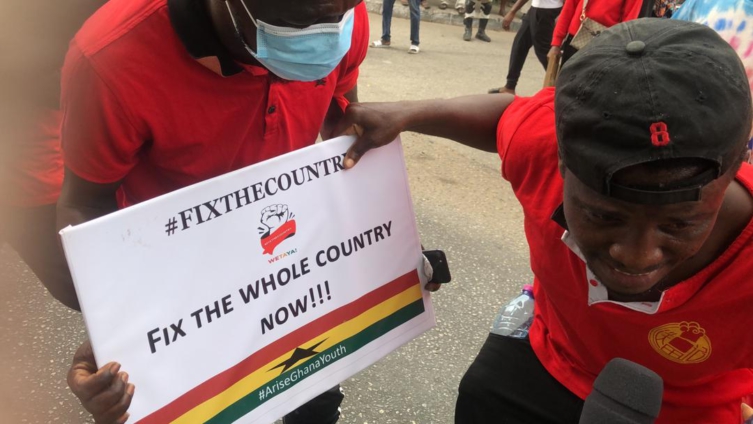 Senior lecturer at the Department of Political Science of the University of Ghana, Dr Kwame Asah-Asante has advised the #FixTheCountry campaigners to specify the problems they want the government to pay attention to.

“I believe strongly that there’s a need for them to articulate their views clearly,” he said on the Joy News AM Show, Thursday.

His comment comes after the #FixTheCountry campaigners on Wednesday hit the streets of Accra to demand that government addresses the many economic and social challenges facing the country.

Dr Asah-Asante stressed that the protesters “need to come out with what it is that they want the government to fix so that we can get the sense of what they have in store for the government”.

The advocacy which began in May, has garnered huge support since campaigners, largely the youth, use social media to demand accountability, good governance, and better living conditions from the government.

Dr Asah-Asante also acknowledged that the group’s efforts serve as a wake-up call for the leaders in the country.

He, however, urged that the campaigners continuously engage the public with the identified problems.

“We want them to be able to come out and then hold seminars, symposiums and a host of other programmes so that people can understand them and people can follow the conversation.”

Governance, he noted, is a dialogue affair that one gives and another takes, therefore, “I believe that the way they’ve started is the way to go.”

The Political Science lecturer also believes that the government will have a solemn reflection on the issues, if conveyed clearly, to work in the interest of the demonstrators, the government, and the population at large.

But, a FixTheCountry convener, Oliver Barker-Vormawor, on the same programme indicated that the group, although have not officially presented a list of the issues to the government, have said enough and expects the government to start work.

He noted that other political actors have said the protesters have not been clear because they have not written down on any petition.

“But when you go consistently, in the released statements, I have systematised these problems and say we need a new constitution because this one doesn’t work, we’ve said that so many times.

“We talked about the need for a development plan that is binding and by that, we need a reform of the constitution,” he recalled.

He further stated that, “we’ve talked about labour issues that we have in this economy, and deal with the inequity in salary administration, that deals with infrastructural issues. So these issues have been put on the table for so long.”

According to the convener, “we’ve become comfortable with the easy question which is dumsor demonstration, so that everybody knows that okay, buy a lot more barges, that is a couple of years back down the line we had judgment debt because we are overproducing.

“That is not what we are talking about. We say the problem is systemic so let’s have a systemic conversation,” he said.

Mr Barker-Vormawor thinks, “the issue we are raising goes beyond the government that it is not one person’s responsibility, it entails the best part of our society and it must involve all stakeholders”.

He, therefore, wants the government to wake up to the responsibilities and facilitate conversations and frameworks that produce results.

Touching on the role of the group in engaging the citizenry, the convener said “we are going to collect one million signatories of vote of no confidence in the 1992 Constitution and the politics of the 4th republic.”