Funny Face pulled a gun on me, shot his dog to make a point – Mother of his twins alleges 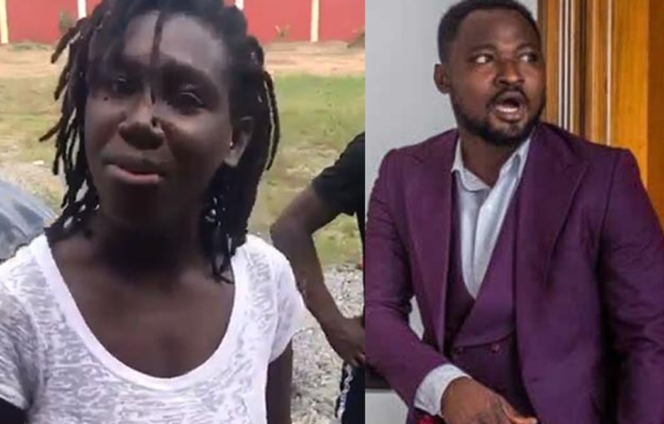 Face Face and the mother of his twins, Vanessa

The mother of comedian Funny Face’s twins has finally responded to allegations he made to the effect that she was abusing him when they lived together.

According to the lady, only known as Vanessa, it was Funny face who was abusive stating that she had to leave him because she had endured enough.

In an interview, she stated that at a point in their relationship, she had to cut the actor with one of his awards to defend herself.

Additionally, Vanessa claimed Funny Face allegedly pulled a gun and threatened to kill her if she made any attempt to render an apology after they had a heated argument.

According to her, the comedian stepped out of their home gave three warning shots daring her to approach him.

She said he later shot their dog saying Vanessa gave more attention to the dog than she gave their children.

The comedian’s ex-lover revealed that many things that went on in their relationship were on the blind side of the public.

According to her, Funny Face tries to seek sympathy from the public by projecting her as the one causing him woes which is unfortunate.

Meanwhile, Funny Face has since been releasing videos and voice notes of his baby mama on social media alleging that she is disrespectful and doing all she can to take the children away from him.

According to him, though he has been playing his part as a father to take care of the family, his baby mama is making life stressful for him to keep up.

DISCLAIMER: The Views, Comments, Opinions, Contributions and Statements made by Readers and Contributors on this platform do not necessarily represent the views or policy of Multimedia Group Limited.
Tags:
Funny face