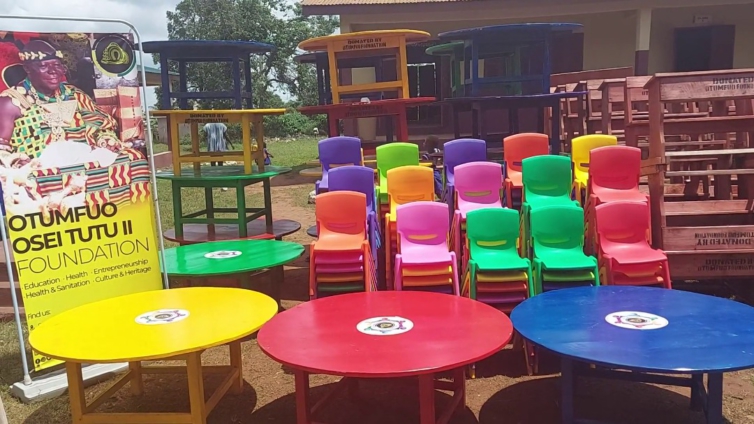 Furniture deficit, coupled with other infrastructural challenges, has been identified as a threat to quality education in the Asante Mampong Municipality of the Ashanti region.

The Municipal Director of Education Gabriel Antwi, says the municipality is in a furniture deficit of over 50 thousand.

Most of the pupils at the kindergarten and primary schools do not have furniture, compelling them to sit and learn on the bare floor.

The director says despite massive improvements in BECE results from 37per cent in 2018 to 82.9 per cent in 2020, teaching and learning are bedevilled by the furniture deficit and other infrastructural challenges.

Though the Municipal Assembly is doing its best to rescue the situation, it needs more support.

To ease the burden, the Otumfuo Osei Tutu II Foundation has donated 120 dual-desks to the Kofiase M/A Basic School; 185 chairs and round tables for kindergarten, while teachers received chairs and tables.

Textbooks and exercise books were also given to Basic 1-6 pupils.

It forms part of His Royal Majesty’s educational policy of quality education.

The six-unit classroom block was painted by the Foundation, windows and doors of the classroom were also fixed.

CEO of the Foundation, Nana Afia Kobi Prempeh, says it costs the Foundation ¢64,505 to fulfil the King’s developmental agenda for quality education.

The Municipal Director of Education has proposed 1pecent of the Assembly’s IGF for the maintenance of school blocks in the municipality.

According to him, the deplorable nature of some schools in the Municipality demands such attention.

Gabriel Antwi indicated the non-availability of washrooms in most schools is also affecting teaching and learning.

Pupils normally seek permission to attend to nature’s call but fail to return, while others resort to nearby bushes which are unhygienic.

He called on the King’s Foundation to assist in such important facilities, including electricity for learning Information and Communication Technology.

The CEO of the Foundation promised to mobilize resources to support the municipality.

DISCLAIMER: The Views, Comments, Opinions, Contributions and Statements made by Readers and Contributors on this platform do not necessarily represent the views or policy of Multimedia Group Limited.
Tags:
Asante Mampong
Furniture
kindergarteng